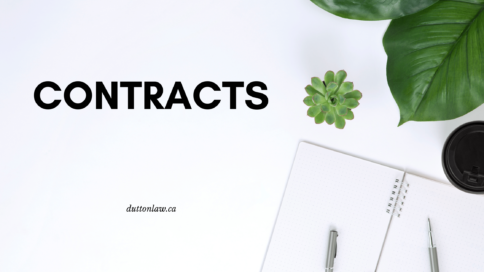 Employment contracts, as in written agreements setting out the terms and conditions of employment are perfectly allowed, valid and enforceable on their own.

In Canada, we follow the principle of Freedom To Contract. Indeed, Canadian courts will generally enforce even the harshest of employment contracts. The rationale is that employers should be free to hire, fire and contract as they please so as to run their business efficiently and effectively on their own terms, not by the whims of any one judge.

Nevertheless, an employment contract or its specific terms may be enforceable if there is a defect.

How Employment Contracts Are Unenforceable

For an even clearer example, take the law of vacation days in Ontario. In Ontario, employers must give their employees at least two weeks’ vacation per year. Thus, if a contract purported to offer less than two weeks’ vacation, it would be void. Even more obvious is the minimum wage. No contract can stipulate a wage less than minimum wage, and if one attempts to (which is not as uncommon as you would think when you consider shady commission-based employers), then it is void and the minimum wage would be put in place by default.

2.        Next, employment contracts may not be enforceable because they contain language that is vague and ambiguous. If there is an employer-friendly clause in the employment contract that has two or more interpretations that are reasonable, the ambiguity will be construed against the employer. In the result, the clause may be set aside or interpreted as essentially unenforceable.

4. Last but not least is when an employment contract is made enforceable because it or a clause contained in it is considered an overly broad restraint on trade. For instance, a non-competition clause that is purported to make an individual essentially unemployable for a long period in a large geographical region will be void.

Most challenging for employers is that employment law is constantly changing. Thus, a perfectly good employment contract one day could be void the next. Judge-made common law can instantly make unenforceable a contract drafted by the most talented lawyers working for the largest employers in Canada even if the contract at issue isn’t even their own. This is how the common law works in Canada.

The litigation of the enforceability of employment contracts is the bread and butter of employment lawyers. Plaintiff lawyers’ desks are filled with cases attempting to prove a termination clause is void so as to get more severance for their clients. Likewise, defendant lawyers’ desks are filled with cases defending the termination clauses they drafted. Most wrongful dismissal cases don’t go to court over the simple calculation of severance. Rather, they go to court to dispute the employment contract that purports to limit severance.