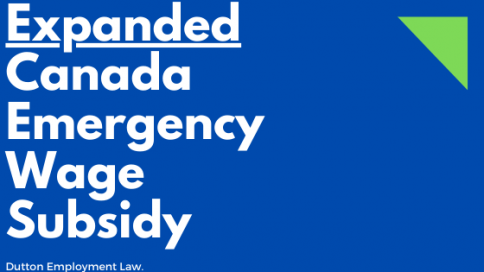 On April 15, 2020 the Government of Canada announced that it will expand the Canada Emergency Response Benefit (“CERB”) to include workers who are earning less than $1000/month.

In effect, the CERB is being changed such that Canadian residents working in lower-paid essential jobs who make less than they would if they did not work and instead collected the CERB will be able to keeping working and receive the CERB at the same time. This initiative will fill the holes in the old CERB that made it more desirable for many to go on the CERB rather than work. Now many employees can do both: work and receive CERB income.

What is the maximum you can earn on the CERB?

The April 15 proposed changes to the CERB program will allow Canadian residents to earn up to $1,000 per month while collecting the CERB. In this regard, workers will be able to receive up to $1,000 from work and $2,000 per month from the CERB at the same time, meaning they can receive $3,000 per month in this expanded Canada Emergency Response Benefit program.

Can an employer now top-up employees on the CERB?

How to apply for the new CERB working program?

Workers can apply to the  expanded working CERB benefit just the same as everyone else who was already eligible for the benefit. The CERB application portal is located online at the CRA My Account webpage.

In addition to the above-noted expanded CERB eligibility allowing employees to earn $1000 in work income, the Government of Canada announced on April 15 that CERB eligibility will be extended to:

Are the CERB changes only for workers already on EI?

We don’t yet know if workers are eligible for the expanded CERB benefit only if they were already on EI or not. On April 15, 2020, the Government of Canada briefly announced these expansions to the CERB, but legislation has not been updated yet.

Update:  The Prime Minister clarified that Canadians who have run out of EI since January 1st can now apply for the CERB.

Nevertheless, based on the text of the press release, it appears Canadians who were not eligible for the CERB because they did not lose a job because of COVID-19 are now eligible for the CERB if they were already receiving EI. We would assume that this means not all Canadians can go on the expanded CERB, only those who (1) lost their job because of COVID-19 or (2) were already on EI. Nevertheless, on April 15, 2020 the Government of Canada merely announced these expansions to the CERB, but expanded legislation has not been passed yet. Nor has the Prime Minister’s press release answered any questions about this issue. We will update this article when we know more.

Student eligibility for the CERB

Also on April 15, the Government of Canada announced that it will institute a temporary top-up of salaries of workers deemed essential in the fight against COVID-19 who make less than $2,500 a month. Details of this CERB top-up program will be released shortly the Government said. However, we expect that the list of workers eligible for the CERB top-up program will be limited to those working for employers deemed “essential” by the federal government, for example hospital workers, grocery store workers, etc.

All the information we have about these CERB changes is an April 15 press release. Once the Government makes new legislation or announces a FAQ on the changes, we will update this article. We expect that to happen by the end of the week (April 17) as per the usual timelines conducted by the Government so far in this pandemic.

Dutton Employment Law is an employment law group in Toronto advising employees and employers on all employment law matters and in all industries. Contact us for a free phone consultation.