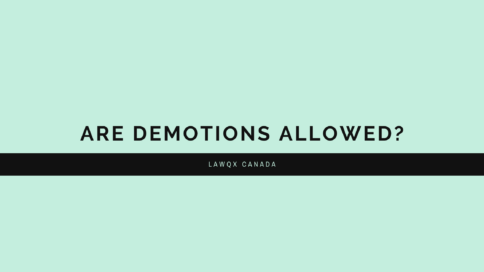 Not every demotion is a constructive dismissal

Where the employer does not have an express contractual term permitting demotions, a decision to demote an employee without triggering a constructive dismissal has been given support by the courts.

For example, if the employer has just cause to terminate an employee, a demotion instead of summary dismissal is not a constructive dismissal.  In Lowery v. Calgary (City), 2000 ABQB 859 (CanLII), aff’d 2002 ABCA 237 (CanLII)) at paragraphs 22 – 30 the court stated:

[23] I have no doubt that there was a unilateral and substantial change to Mr. Lowery’s contract of employment. … That being said, even if it can be said that Mr. Lowery was constructively dismissed, I decline to find that his demotion to paramedic was wrongful based on the defence of just cause.

At the same time, a demotion without just cause may not be a constructive dismissal if the demotion is really a lateral move, not a dramatic decrease in responsibilities. In Meyers v. Chevron Canada Limited, 2013 BCSC 420 (CanLII), there was no constructive dismissal for a demotion that resulted in the employee no longer having had any other employees reporting directly to him, although he would have retained the same pay grade, salary, benefit package and bonus programs. The court noted:

[39] It is clear from the case law that each case turns on its own facts. …

[43] There is no evidence regarding a written contract of employment between Mr. Meyers and Chevron for the position he was in at the time of the reorganization.

[44] Mr. Meyers takes the position that, objectively viewed, the Business Analyst job offered to him was a demotion. He points to the facts that he would no longer have any employees directly reporting to him, or employees who he would be responsible for in terms of their performance reviews.

[45] However, I am not satisfied that there should be a term implied into Mr. Meyers’ employment contract preventing Chevron from varying the subject matter of Mr. Meyers’ management responsibilities. In my view, the evidence does not support the view that the parties contemplated that Mr. Meyers’ role was so rigidly defined. As noted above, Mr. Meyers’ supervisory role had diminished over time. An employer requires some latitude to structure the affairs of its operation, and such an inflexible term would shift the balance too far in favour of the employee.

[46] Even if this were a term of Mr. Meyers’ contract of employment, I am of the view that the breaches he complains do not go to the root of the contract. …

[47] In this case, the position being offered to Mr. Meyers was not a dramatic qualitative change in his duties. Had he accepted the Business Analyst position, many of the duties he had before would remain unchanged and would constitute a major part of his duties in his new position.

[52] Although I accept there was some diminishment of Mr. Meyers’ responsibilities in that he no longer directly supervised any employees, or had responsibility for an operations budget in addition to project budgets, I find that the diminishment was not enough to constitute a fundamental breach of his employment contract.

[53] It is clear from the evidence that if Mr. Meyers had taken the Business Analyst position he would have significant leadership responsibilities as a project manager, as well as be responsible for the projects budgets. There is no evidence that Mr. Meyers was being sidelined as he asserts. Rather, the company was going through a major reorganization, which included significant downsizing of its IT department. Mr. Meyers was a valued employee who was offered one of eleven jobs that remained following the reorganization.

[54] The job was a senior position in the IT department, and the person in that position had opportunity for advancement, which has occurred. Two of the individuals who occupied Business Analyst positions have since been promoted to the Manager, IT Canada position.

[55] One of Mr. Meyers’ complaints is that he was unable to apply for the Manager, IT Canada position during the ROM. He says the Business Analyst position was a step back in his career and would have hampered his future career advancement. However, the evidence is that he could have applied for that position in the future. It was only during the ROM that individuals could not apply for a promotion. That was the same for every employee in Chevron, including the employees who were senior to Mr. Meyers. The fact that Chevron would not make an exception for Mr. Meyers does not constitute a slight as suggested by him.

[56] As well, Mr. Meyers’ evidence is he felt embarrassed and humiliated because people who had formerly reported to him would now be equals. However, the evidence does not support that contention. Mr. Meyers was to report to Mr. Krawchuk who he had considered a peer pre-Accelerated Downstream. As stated earlier, while Mr. Krawchuk was shown reporting to the same individual on the organizational chart, he was in a different PSG and had more employees reporting to him, and more responsibility within Chevron. As well, Mr. Krawchuk had been in the employ of Chevron for a longer period of time than Mr. Meyers.

[57] Mr. Meyers points to the fact he would no longer have an individual office but would have to sit in a cubicle, which would be humiliating and degrading. However, the other Business Analyst position was filled by Mr. Leverton who was a PSG 23 with significant experience at Chevron. The other positions reporting to Mr. Krawchuk were filled by a number of individuals who had been peers of Mr. Meyers in that they were in the same level on the organizational chart prior to Accelerated Downstream. While Mr. Meyers may have lost some stature because he no longer had a supervisory role and would have to sit in a cubicle, his concerns are more subjective than objective. All employees in PSG 25 and below sit in cubicles. He would continue to assume many of the budgetary and leadership responsibilities he had before, with a potential for advancement. Mr. Meyers was being offered one of the senior positions in a significant downsizing operation. It was clear that Chevron viewed him as a valued employee.

[60] On all of the evidence, I am of the view that Mr. Meyers has failed to establish he was constructively dismissed. I find that Mr. Meyers was hasty in resigning from his position without determining whether his concerns regarding the job would be borne out. In my opinion, Mr. Meyers resigned by failing to accept the new position that was offered to him in the ROM.

Even if a demotion was a constructive dismissal as held by a court, all employees have a duty to accept the demotion to mitigate their damages. See Loehle v. Purolator Courier Ltd., 2008 CanLII 30292 (ON SC), where the court stated:

[22]. The mitigation issue is whether Mr. Loehle ought to have accepted the demotion during an otherwise appropriate notice period.

[30] Is the situation substantially different when an employer does not wish to dismiss an employee but, being unsatisfied with his performance, or for some other valid reason, wishes to place him in a different position at the same salary? Why should it not be considered reasonable for the employee to mitigate his damages by working at the other position for the period of reasonable notice, or at least until he has found alternative employment which he accepts in mitigation.

[31] The fact that the transfer to a new position may constitute in law as constructive dismissal does not eliminate the obligation of the employee to look at the new position offered and evaluate it as a means of mitigating damages. In all cases, comparison should be made to the contractual entitlement of the employer to give reasonable notice and leave the employee in his current position while a search is made for alternative employment. Where the salary offered is the same, where the working conditions are not substantially different or the work demeaning, and where the personal relationships involved are not acrimonious (as in this case), it is reasonable to expect the employee to accept the position offered in mitigation of damages during a reasonable notice position, or until he finds acceptable employment elsewhere.

[33] In this case, Mr. Mifsud improperly rejected the opportunity to mitigate his damages by maintaining an employed status from which to seek a preferable position elsewhere.

[59] In Evans, the plaintiff was actually dismissed without cause and the employment offer was for the same position. Here, Mr. Loehle was offered a demotion in circumstances that could not be justified by the defendant. In this respect, Mifsud is instructive as the demotion was the result of dissatisfaction with the plaintiff’s job performance. The principles advanced in Mifsud and Evans, in my view, apply regardless of the nature of the employment offer. It is the surrounding circumstances that require consideration. In particular, the conduct of management and the environment surrounding the demoted position require scrutiny.

[66] The conduct of management, as previously discussed, was inappropriate in presenting the offer of employment for a lesser position. Their actions, however, did not create an unworkable environment and can be viewed as an attempt to retain a valued employee and, in effect, mitigate their liability.

[67] Mr. Loehle’s claim is based upon his demotion and the result constructive dismissal. His subjective assessment of the situation is not unreasonable. An objective consideration results in a different conclusion. In my view, a reasonable person would have accepted the position offered, notwithstanding the demotion, until alternate employment elsewhere was obtained. Searching for a comparable position with another company while working should be less difficult than during a period of unemployment.

[68] In this result, Mr. Loehle has not met the mitigation test as established by the case law.