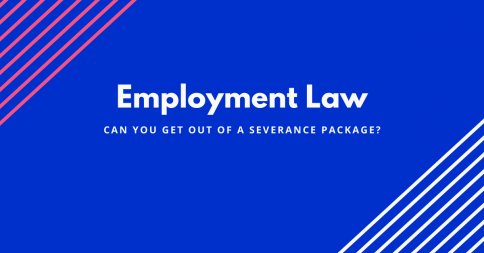 Can an employee cancel a severance package release?

Question: Can employees get out of signed severance packages?

Answer: Everyone employment lawyer knows that an employee’s acceptance of a severance package; coupled with the signing of a final release is essentially a bar to that employee advancing a future claim for wrongful dismissal. Nevertheless, in a recent appeal from the Ontario Small Court at the Ontario Divisional Court, one unrepresented gentleman claimed wrongful dismissal, unpaid bonus and vacation pay over the notice period despite his acceptance of a severance package and signing of a final release.

Nevertheless, about eighteen months later, the Appellant sued the Respondent employer at the Small Claims Court. The Plaintiff sought the following relief:

In the result, the Small Claims Court Judge dismissed the Appellant’s claim, finding among other things, that the full and final release signed by the Appellant was a full answer to his claim.

Undeterred, the Appellant appealed the Small Claims Court decision to the Divisional Court. However, to little surprise to the bar, the appeal failed.

Get out of a signed severance package?

Employers should be cautious that there is one avenue to get out of a signed severance package. Employees can argue that if the release was unconscionable, the court should set it aside. Whether a release is unconscionable is based on the criteria for unconscionability set out in Titus v. William F. Cooke Enterprises Inc., 2007 ONCA 573 (CanLII).  At paragraph 38 of Titus, The Ontario Court of Appeal stated the four elements necessary for unconscionability:

Thus, to ensure that a release holds up, employers should ensure to:

Interestingly, the Appellant in Zhang v. Dell Canada, discussed above, did plead that the severance package he signed was unconscionable. However, he didn’t advance any evidence to the same effect in trial, and thus his claim was quickly dispensed with procedurally. Perhaps his one and only avenue in his wrongful dismissal action was the unconscionably argument, but he chose to dispel it.