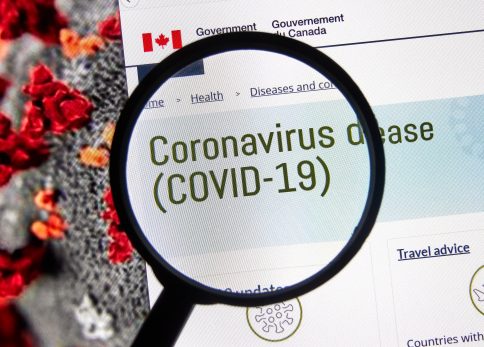 In response to the economic impact COVID-19 is having on Canadian small – medium-sized employers, the Government of Canada announced a series of new temporary measures to help Canadian employers stay afloat and make payroll.

This wage subsidy could help small, medium and large-sized businesses keep employees on the payroll during the COVID-19 crisis.

The Prime Minister said the newly announced wage subsidy will be backdated to March 15, 2020.

The 75 per cent wage subsidy for qualifying businesses will last up to 3 months, retroactive to March 15, 2020.

More details on eligibility criteria for the new COVID-19 wage subsidy will be shared by the Federal Government soon and we will update this article when they do. There is no legislation yet, just a Government of Canada April 1 press release, a March 27 press release from the Prime Minster’s Office and a speech made by the Prime Minister on April 8.

Update: we learned more information on April 8 and wrote an article about the CEWS eligibility.

The COVOD-19 75% wage subsidy program will last for a maximum of three months and employers will have to reapply each month demonstrating, that revenues in each month are 30 per cent less than they were in the same month 2019.

Update: we learned more information on April 8 and wrote an article about the CEWS eligibility.

Little information is available yet and we don’t have an answer. But, the government has not said foreign-controlled entities are ineligible.

A good indication showing that foreign-owned business will likely be eligible for the Canada Emergency Wage Subsidy is that, in this April 1 press release, the government said this about the reduction in revenue requirement: “An employer’s revenue for this purpose would be its revenue from its business carried on in Canada earned from arm’s-length sources”.

This may indicate that foreign-owned businesses operating in Canada would be eligible for Canada Emergency Wage Subsidybecause the specific requirement for our purposes seems to “business carried on Canada”. This would make sense too as many Canada employers are foreign-owned.

The Government of Canada released a statement saying that all employers taking advantage of the 75% Canada Emergency Wage Subsidy, “would be expected to at least make best efforts to top up salaries to 100% of the maximum wages covered.” We don’t yet know what this means and whether all businesses will be required to meet this top-up expectation. When we know more, we will update this article. Still, on April 1, 2020, the CBC reported that Finance Minister Bill Morneau said, “if an employer is unable to [top up] this time, given the ongoing economic challenges, they can simply pay the employee the amount they receive from Ottawa — without an additional top-up.”

How Much is the Wage Subsidy Worth

Once in place, applications for the COVID-19 wage subsidy will be made through the employer’s Canada Revenue Agency Portal.

In addition, also on March 27, the Prime Minister announced that the Government of Canada is creating a new loan program called the Canada Emergency Business Account (“CEBA”) to help small to medium-sized employer cash flow and keep employees on the payroll.

The Prime Minister announced the Canada Emergency Business Account loan will allow banks to offer $40,000 loans – guaranteed by the government – to qualifying businesses.

These loans will be interest-free for the first year.

The Prime Minister announced that the new Canada Emergency Business Account loan will provide funding to eligible banks so that they can provide interest-free loans in the form of lines of credit of up to $40,000 to business customers with payrolls of less than $1 million. To that effect, small to medium-sized employers will likely have to apply for this new emergency loan through their bank, not the Government of Canada.

The Prime Minister announced that one-quarter of this Canada Emergency Business Account loan (i.e. up to $10,000) is eligible for complete forgiveness.

More details on eligibility criteria for the COVID-19 Canada Emergency Business Account loan will be shared by the Government before the end of March and we will update this article when they do. There is no legislation yet, just a press release from the Prime Minster’s Office.

I run a sole proprietor business using a personal chequing account. Can I still apply? No,  there must be a business bank account created before March 1, 2020.

Update May 19, 2020: The Government of Canada has recently announced plans for expanded eligibility for the CEBA Program. Details are not yet finalized. But this was announced in the Prime Minster’s press release:

“The changes to the CEBA will allow more Canadian small businesses to access interest-free loans that will help cover operating costs during a period when revenues have been reduced, due to the pandemic.

The program will now be available to a greater number of businesses that are sole proprietors receiving income directly from their businesses, businesses that rely on contractors, and family-owned corporations that pay employees through dividends rather than payroll.

To qualify under the expanded eligibility criteria, applicants with payroll lower than $20,000 would need:

1. a business operating account at a participating financial institution

The funds from the Canada Emergency Business Account loan shall only be used by a borrower to pay operating expenses of the Borrower including, but not limited to: payroll, rent, utilities, insurance, property tax and regularly scheduled debt service, but may not be used to fund any payments or expenses such as prepayment/refinancing of existing indebtedness, payments of dividends, distributions and increases in management compensation.

Furthermore, also on March 27, the Prime Minister announced GST/HST payments will be deferred without interest until June 2020 so employers can use that money to cover payroll and cash flow during the COVID-19 crisis.

The GST/HST deferral to June will generally apply to GST/HST remittances that become due in March, April, and May. These amounts would normally have been due as early as the end of this month (March 2020). The Government of Canada announced this GST/HST deferral program will take effect immediately.

More details on eligibility criteria for the COVID-19 GST/HST deferral program will be shared by the Government before the end of March and we will update this article when they do. There is no legislation yet, just a press release from the Prime Minster’s Office.

Update, June 2, 2020: In a surprise regulation issued on May 29, 2020, retroactive to March 1, 2020 and until Ontario’s emergency order is no longer in place, all covid related temporary lay-offs will be deemed an infectious disease emergency leave. O. Reg. 228/20 appears to attempt to make life more predictable for employers. It prevents employees from complaining that they have been “constructively dismissed” to the Ministry of Labour. The new regulation also declares that workers who were laid off shall not be deemed to have been laid off, but instead are on “infectious diseases emergency leave.” The way it does this however, is quite confusing, as for instance employees who were told they were “laid off” will now be counted as being on leave, even though they did not request it. Call us for more on this regulation.

Dutton Employment Law advises employers in all industries in Ontario on employer rights, employment law, human rights law and occupational health and safety law. Call for a free consultation with an employment lawyer.