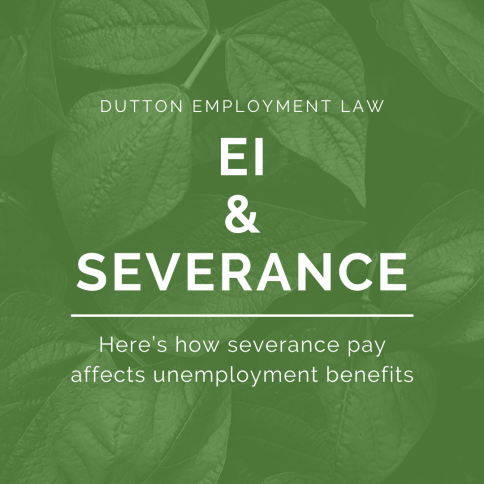 This post is temporarily out of date. In response to the COVID-19 pandemic, Canada’s Employment Insurance rules have been temporarily changed in Canada to allow employees to access EI benefits even when they received a severance package. Read more here.

Worried about how severance pay affects unemployment benefits? It is true that getting a severance package does disrupt EI in two ways:

How does severance pay affect unemployment benefits (“EI”) in Canada?

When to apply for EI?

I tell everyone, don’t end up like this fellow, and miss the deadline to apply for EI because you thought you couldn’t get EI until your severance was exhausted. This is not true. You get approved for EI if you lost your job, not if you got severance.

Whether or not you received a severance has no effect on the deadline to apply and you don’t need to have a signed severance agreement to apply for EI. You need nothing but the fact you lost your job.

Lastly, keep in mind as well that you can apply for benefits even if you have not yet received your Record of Employment (ROE).

After you are approved for EI, and if you did not receive a severance package, your EI payments will start immediately (which is around 28 days after you apply for EI).

You must tell Service Canada about your severance in the application for EI. If you do not have a severance that is ok but tell them that.

However, if you apply for EI with a severance package already signed, although you will be approved for EI, you cannot receive EI payments until your “months” of severance has expired. For instance, if you agreed to a six months’ severance package, you can’t get EI until six months have passed since the date of termination. You will be approved and in the system, but Service Canada won’t start paying you until six months is up.

For example, if you make $80,000 per year, and you got a severance package lump sum of $40,000, then, generally, the CRA will determine that you received a six months’ severance package. This means you can’t get EI until six months is up. You can appeal if you don’t agree, however, which is not complicated. Just clearly and simply show them how their calculation is wrong in a letter.

Why does severance affect EI?

Severance is considered “earnings” just like salary. Severance is essentially pay in lieu of “notice” that people are paid when they are terminated. Employers have to provide notice to employees when they fire them, but they can provide severance instead of giving them notice. In this regard, severance is basically just the same salary you get except you don’t have to come to the job anymore. And that’s why Service Canada thinks you should not get EI and severance at the same time. It is the same reason why you cannot get EI once you get another job.

What happens to EI if I did not get severance?

If you do not receive severance, you may receive EI immediately and there shall be no effect on your EI eligibility or entitlements.

What happens to EI if I get severance later?

In this case, individuals should still apply for and receive EI while they wait to receive their severance.

There is no penalty for getting a severance package while you are on EI, but you do have to pay the EI back without interest. However, the upside is that you get back those months of entitlements that you paid back. In other words, if you had to pay back 4 months of EI, you get 4 additional months of EI.

It is not complicated to calculate how much money an employee will have to pay back Service Canada for EI overpayment.

In most cases, a Notice of Debt takes several weeks to complete.

The finished Notice of Debt will, generally, require an individual to pay back every dollar he or she received in the number of months of severance the settlement or wrongful dismissal lawsuit award overlapped with the EI payments. For example:

In this scenario, the CRA would issue Sara a Notice of Debt stating that she has to pay back 2 months of EI payments because her severance settlement entitled her to earnings the whole time she was on EI. Precisely, the CRA considers that her settlement is backdated to the date she was terminated. Therefore, even though she only got her severance in April, she was “paid severance” for February and March.

Moreover, Sara will not be able to get anymore EI until 8 months after her termination (because this is how long the severance package is).

Paying back the EI overpayment

If you are an employee and your lawyer has negotiated you a better severance package, the lawyer for the employer will usually require you to obtain a Notice of Debt before they release the settlement funds. Then the employer’s lawyer will pay Service Canada back on your behalf out of the settlements funds. This makes getting paid a signed severance package take about a few weeks longer. This is another minor factor in how severance pay affects unemployment benefits.

Alternatively, in cases where no lawyers are involved, individuals may pay back the EI overpayment themselves. However, we would recommend paying it back it immediately right out of the settlement funds.

Will my EI get extended if I have to pay them back for an overpayment?

Yes, if you go on EI, but then receive a severance, and pay Service Canada back for the EI you got during your severance period, then you will be granted additional weeks of EI eligibility for the exact amount of time you paid EI back. For example, let’s say:

However, unfortunately, in most cases, individuals never get a chance to ever use their full EI they paid for because by the time their severance package has expired, they have found new work. This is a major factor in how severance pay affects unemployment benefits. You can’t get EI once you find a new job.

Is there a way to shield settlement monies from EI?

Yes, if your settlement with your employer was for general damages, not “pay in lieu of notice” or “severance”, then you don’t have to pay back EI. This is because general damages are not income. They are not “earnings” much like winning a lottery ticket is not earnings.

Beware of simply classifying severance as general damages. The CRA may examine your claims. There must be some legitimate nexus regarding the general damages, such as a human rights lawsuit or a lawsuit for “punitive damages”. However, there does not need to be a final verdict, the parties can settle and refer to a portion of the settlement as general damages. Speak to a lawyer about this as it is quite complicated.

Dutton Employment Law is an employment law group in Toronto at Monkhouse Law. We assist employees and employers in severance and wrongful dismissal. Contact us.