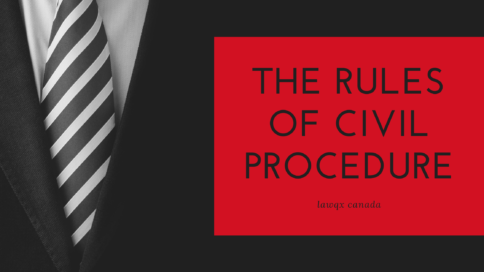 How Lawsuits work in Ontario — the Rules of Civil Procedure

If you’re filing a lawsuit or being sued, it’s common that your case will start at the Superior Court of Justice, which hears most civil proceedings in Ontario. This Court handles cases related to employment law disputes, commercial disputes, personal injury, bankruptcy, and more. The whole process of this Court follows the Rules of Civil Procedure.

However, day-to-day lawsuits may also be heard by several other courts that have their own rules. The Divisional Court is a branch of the Superior Court that conducts judicial reviews—a process where a court reviews the decisions made by governmental or quasi-governmental authorities. There is also the Small Claims Court, which hears cases for under $35,000 and is governed by the Rules of Small Claims Court. Other courts include the Criminal Court, Family Court, Tax Court, and the various appeal courts in Canada.

In this post, we provide a broad overview of Ontario’s Rules of Civil Procedure. This post will explain the difference between an action and application, the process of bringing a claim or defending against one, the discovery process, how to set an action for trial, the pre-trial conference, and what happens in an actual trial. We hope that our article helps you under how a lawsuit works in Ontario.

There are two types of civil proceedings in civil procedure. The first is an action. This involves an exchange of a Statement of Claim and a Statement of Defence and the obligation to produce documents and oral statements from each side.

The second is an application. In an application, the judge makes a determination based on the evidence before him or her. There are usually no live witnesses or oral testimonies in an application. The remainder of this article will focus more on the action process.

Bringing and Defending Against a Claim or Motion in Ontario Courts

To file a Statement of Claim, the Court first must issue it. This requires paying a court fee, preparing multiple copies of your Statement of Claim (one for yourself, one for each defendant, and one for the Court), and completing the Form 14F. Once the Court issues the claim, you (or more likely your lawyer) must then serve it to the defendant within six months, unless a court order specifies otherwise.

Next, after the Statement of Defence, a Plaintiff may file a Reply within 10 days to respond to the statement of defence, but not with any new allegations.

Following the close of pleadings, in employment law especially, the next step is “mediation”, which is required in the City of Toronto before a matter can go to trial, but not for all of Ontario. This is where the parties and a neutral mediator meet up and attempt to reach a settlement and end the matter quickly and cheaply.

At any stage of the proceeding, either party can also file or defend against a motion. Motions are made for requests such as summary judgment (very common in wrongful dismissal matters), extending the time to serve a Statement of Claim or Defence, requiring certain documents to be brought to the case, forcing a party to stop certain actions, etcetera. To respond to a motion, the other party must prepare a motion record setting out opposing facts and evidence to the original party’s motion.

The Discovery Process in Ontario Lawsuits

Generally, the discovery process is only available in actions. During this time, the parties will exchange documents related to the lawsuit and proceed with oral discovery, where people related to the matter are questioned. Both parties must disclose all documents in their possession of which are relevant to the matter.

The other side’s lawyer may interview you with a prepared list of questions. It’s good to talk to your lawyer on how to prepare for this process and come up with a plan. Your lawyer can even conduct a mock examination with you so that you’re familiar with the process. This examination is critical because if your testimony here conflicts with any statements you make during the trial, the opposing lawyer may try to undermine your credibility.

The pre-trial conference is just as its name entails. Before the trial, the parties meet to reduce the number of issues that go to trial and to see if they can settle and avoid trial altogether. Ontario pre-trial conferences must be within 180 days of the matter heading to trial, and items discussed during this time remain confidential.

How Trials Happen in Ontario Lawsuits

Trials are what people usually think of when of how a lawsuit works. Similar to the TV shows, the trial provides a time for the plaintiff (or more likely their lawyer) to present evidence against the defendant, and vice versa. This evidence can include calling witnesses to the stand. The other party can also cross-examine a witness.

The goal of the plaintiff is to prove their case against the defendant, and the goal of the defendant is to prove that the plaintiff hasn’t done so. The trial concludes with each side providing closing submissions, and the judge will consider all evidence and make a decision based on a balance of probabilities. The judge may give a decision right there and then or provide a decision later on. The Rules of Civil Procedures will also generally have the losing side pay the costs related to litigation, but this is now always the case.

This article provides a brief summary of how a lawsuit works in Ontario. Overall, the Rules of Civil Procedure are incredibly complex, with thousands of pages of rules.

My advice: Finding a good lawyer to assist you is the very first step you should take next.