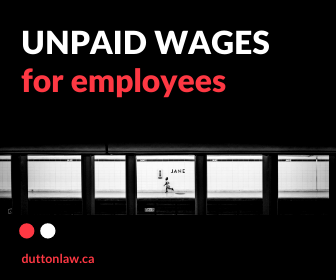 Employer not paying you?

If your employer is not paying you, generally there are three avenues you can take to try and recoup your unpaid funds. (1) you can call the Ministry of Labour, (2) you can hire a lawyer to demand the unpaid salary or sue them or (3) litigate it yourself at the Small Claims Court.

We usually tell most potential clients to call the Ministry of Labour, not an employment lawyer if their employer is not paying them. Unfortunately, the reason for this is because their employer likely wouldn’t pay even if we won a lawsuit. The fact is, if the employer has no money to pay wages now, it wont have any money in a year or two after the conclusion of a lawsuit.

An employment lawyer could easily win an unpaid wages claim or an unpaid internship claim – it is not a complicated matter. At the same time, an employment lawyer, unlike the Ministry of Labour, could easily win a claim for common law pay in lieu of notice because of the constructive dismissal caused by the failure to pay wages (a failure to pay wages is a breach of the employment relationship tantamount to a termination without cause, i.e. a constructive dismissal). The Ministry of Labour does not have the power to enforce common law damages.

Nevertheless, you cannot milk a dry cow. If a small employer cannot even pay its wages, how could it possibly pay what it owes following a successful, yet expensive wrongful dismissal lawsuit leveled against it? Accordingly, it is more practical to get the Ministry of Labour to handle an unpaid wages complaint, for free, rather than waste money on a lawyer. The tradeoff between what a lawyer could get an employee versus what the Ministry of Labour could get the same employee may not be worth it when the employer will likely ignore a court order to pay anyways. The stress, money and time it takes to litigate, plus having to pay more to go after the directors personally if the company fails to pay following a successful trial is not merited in most cases. Still, in cases worth high value (above $35,000) it may be worth it.

I would only advise a potential client to retain a lawyer in case their small employer owes them unpaid wages, and appears unable to pay, if they had meaningful seniority and were highly paid, thus entitling them to significant damages worth rolling the dice for.

Alternatively, a lawyer can assist employees in making their Ministry of Labour complaint a successful one for a relatively nominal fee. In these cases, the lawyer will only be working on the file for just a few hours.

Alternatively, employees owed unpaid wages can represent themselves or hire a paralegal for cheaper than an employment lawyer at the Small Claims Court. It is not complicated. Simply draft a Statement of Claim, setting out very brief facts and the wages owed, and file and serve it. The Small Claims Court will then allow you to argue your own case. Its not hard and the court will give leeway to unrepresented litigants.

In many cases, however, you will settle the case at a Settlement Conference, which is a mandatory court process before the trial.

Next, and this is where it does get complicated (legal advice should be sought), after you successfully sue the employer or their directors for unpaid wages, summon them to an examination hearing to discover their assists you can seize. Thereafter, seek a writ of seizure and sale of personal property.

How does an employee collect unpaid wages?

After winning your judgment, the procedure to collect if the employer doesn’t pay is this: