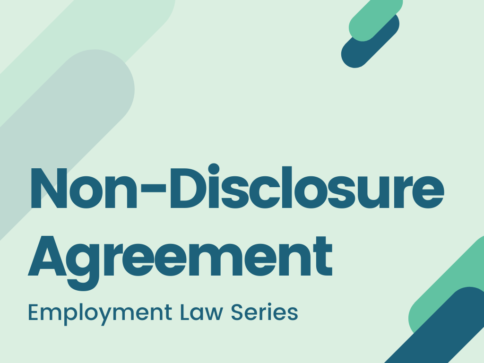 What is a non-disclosure agreement?

A non-disclosure agreement (NDA) is a contractual term between an employer and an employee, generally to protect some form of the employer’s confidential information. NDAs are used whenever there are sensitive information or trade secrets that the employer does not want to be released to the public.

An NDA may also provide legal remedies if confidential information is disclosed.

NDAs are used by businesses to help maintain a competitive advantage in their field. The key is that companies want to protect their trade secrets, client lists, and designs such that competitors cannot use them.

An NDA is typically a clause contained in an employment contract or it is its own standalone contract an employee must sign before they start work.

Who makes and signs a non-disclosure agreement?

An employee signs an NDA typically at the beginning of an employment contract. The NDA will be binding on the employee for their period of employment, and frequently for some period after or forever.

NDAs are typically used in situations where valuable information is being shared about a business, and where the employer would like to ensure that the information is not stolen or used without their consent.

NDAs typically arise in situations where:

In addition, some business may require consultants or even just people being interviewed to sign an NDA for the information disclosed during interviews, meetings, or negotiations leading up to the signing of a contract.

Key elements of a non-disclosure agreement

The key elements of an NDA are:

An NDA will often include some provisions stating the legal recourse that can be taken if the NDA is breached. This will typically be in the form of injunctions and liquidated damages that the signatory will be required to pay.

What an NDA is not

Not all information about a business can be kept confidential through an NDA. Having employees, investors, and contractors sign NDAs does not allow a business to keep confident information that is in the public record or not a secret.

How will a non-disclosure agreement impact you?

For employers, an NDA is a legal tool to protect the trade secrets, know-how, client lists and intellectual property of an individual or business. Employers can use NDAs in order to prevent their ideas from being stolen and maintain fair competition within their field.

For employees, NDAs pose certain restrictions on whom specific information about ideas or business practices can be shared with. NDAs are a requirement of many employment contracts, particularly those in sales or in emerging businesses/technologies. When signing an NDA, employees should be sure to take note of time limits, broad language that appears to be about protecting the company rather than the information, damages provisions that set out specific amounts that an employee must pay if they breach the NDA, and arbitration clauses that set out how disputes will be resolved. Employees should also ensure that anything mentioned to them orally related to the NDA is included in the written document before signing.

You can ask a lawyer or use a legal form building website to make your NDA, or you can see from this example what one might look like. However, please note this example is just a snippet, it is not complete:

Courts are not reluctant to enforce NDAs (unlike, for example, non-competition agreements). The public policy interest in enforcing confidentiality agreements is that society is made better when businesses can pursue trade and innovation without the risk of sabotage or unfair competition from individuals once privy to company secrets.

Nevertheless, Canadian courts have determined that to be enforceable, NDAs must meet the requirements of reasonableness and legitimate business interests, including limits with respect to time and specificity. However, the absence of a time limitation has been held to be enforceable. For example, in Evans v. The Sports Corp., the Court of Queen’s Bench of Alberta held that:

[240] There has never been any general requirement for temporal limitations on the wrongful disclosure of truly confidential or proprietary information by former employees. At common law, employees may not disclose their employer’s confidences. They are only released from such obligations when the information is no longer confidential or proprietary, or limitation periods have passed. It is illogical to suggest that an employer must, to validly protect its confidences and proprietary information, specify a reasonable date after which a former employee is free to use the information for his own benefit and to the detriment of the former employer. These types of restrictions are not the sorts of restrictions that are prima facie in restraint of trade and void,  and presumed to be unenforceable.http://canlii.ca/t/fl0b3