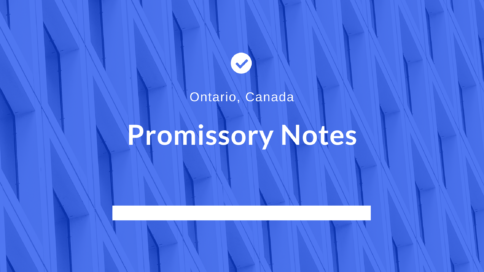 Are Promissory Notes Legally Binding in Canada and How Do They Work in Canadian Law?

Helping a family member or close friend out with an altruistic loan is not uncommon. It may be a brother or a high school friend who may need to borrow a few thousand dollars for a car, rent payment, or other necessities. In these situations, we likely won’t reach out to a lawyer to draft a loan agreement with complicated procedures on what occurs on default or upon a late payment.

A promissory note is a legal document to evidence when a lender loans a sum of money to a borrower. The document contains a promise to repay the loan amount under specific terms and conditions and is a simpler alternative to a loan agreement. In Canada, Part IV of the Bills of Exchange Act generally governs promissory notes.

When Should You Use a Promissory Note?

Generally, a promissory note comes in handy for smaller loans with someone you’re close with. The borrower and lender likely trust each other and believe that the borrower will pay back the amount without the Canadian law having to step in.

Although some may not use any documentation when lending money to those they trust, a promissory note can ensure that both the borrower and the lender are on the same page about the terms of the loan. Promissory notes are generally legally binding and can thus be enforced in court, in a case of default or disagreement. Further, a promissory note in Canada creates a verified paper trail of who the money is being lent to or borrowed from. This can prevent organizations such as the Canada Revenue Agency from suspecting the parties of tax fraud or money laundering.

What Terms Should You Include in Your Promissory Note?

Promissory notes in Canada are straightforward relative to most legal contracts. Commonly, individuals use online resources to write their own. At the most basic level, a promissory note should include:

● The sum of money being advanced/borrowed;

● The identity of the lender and borrower;

● When the borrower has to repay the money;

● How the borrower will repay the money;

● Whether the borrower will need to pay interest, and if so, how much;

● Whether there’s collateral to secure the loan against; and,

● The borrower’s recognition of the promissory note, evidenced by their signature.

How a borrower repays the debt can also differ between promissory notes. The debtor can ultimately repay the principal amount (the amount initially borrowed) in instalments or all at once. Another option is for the borrower to pay only the interest before the maturity date or pay part of the principal along with interest. There are ultimately dozens of ways to arrange how a borrower repays the amounts owed.

Promissory notes are not limited to these terms, however. It’s up to the lender and borrower on how they want to construct their agreement.

An important caveat regarding promissory notes in Ontario is how the Limitations Act, 2002 affects a note’s enforceability in court. Because of the Limitations Act, a borrower has no obligation to repay a loan under a promissory note in Ontario after a certain amount of time has passed. A lender has two years to collect repayment or commence legal proceedings for repayment after the maturity date of the loan or after the date where the lender demanded repayment. After the two years, the agreement is statute-barred and unenforceable.

For those who wondered whether a promissory note is legally binding in Canada — it is! A promissory note in Canada and in Ontario is a powerful tool that simplifies the borrowing process, without leaving out the details. If you’re lending or borrowing money to or from a close friend or family member, a promissory note may be the best option because there’s already trust between you and the borrower/lender. This document ensures that the borrower and lender understand what the loan details are — often, without the fuss of lawyers.