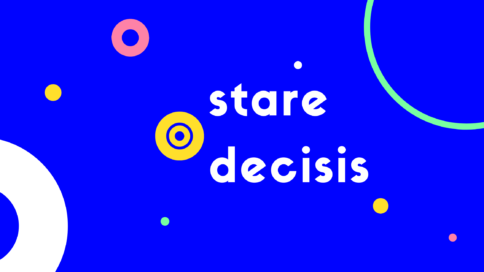 Stare decisis – what does it mean?

Like a vast majority of the terms used in law, stare decisis is a Latin term. According to the Canadian Encyclopedia, the term’s literal translation is “let the decision stand”. Stare decisis refers to a principle of precedent. According to this principle, the rules that judges created in earlier decisions in the court, are the ones to be applied in later cases with similar issues or facts.

History of the stare decisis principle

The principle (or doctrine, as others refer to it) of stare decisis emerged from the idea of English Common Law. Common law refers to a system of “judge-made” system of the law. Common law was created in the early Middle Ages in England to ensure unity and consistency in the application of law throughout the land. If there is a difference in how a law is applied in one part of the land from another, that will create severe implications in terms of people being able to follow the law. Canada, being a British colony initially, adopted the English way of applying the law.

Where do I find “common law”?

The common-law tradition refers to a law that is not written down as legislation; rather, decisions that were made by judges in previous cases. It is a system of rules that guides judges in the decisions they make in similar cases that come later. Since it is not written down, it cannot be found in any kind of legislation, code, statute, etc. It can only be found in past decisions, which are available on many open domains with user-friendly language, like the Supreme Court of Canada’s Cases in Brief website or CanLII Connects.

Canada’s legal system is based on a combination of common law and civil law. Civil law comes from civil codes that contain a comprehensive statement of rules, framed as broad and general principles to deal with any disputes that may arise. Unlike the tradition of common law, civil law courts first refer to the rules written in the civil codes, and then any previous judgements to determine whether or not the application of the law has been consistent.

Québec is the only province with a civil code, and the rest of Canada uses common law. There are some codes that apply all throughout Canada, like the Criminal Code, for example. Since the application of the law in Canada is a combination of the two, we do not only rely on the decisions of judges in previous cases. The doctrine of stare decisis comes into play when there is a new case with very similar facts or issues to a previous one, and the decision/rule made by the judge in that previous case is used to guide the decision to be made in the newer case. If the legislation provides a clear-cut answer for how to deal with a specific dispute, then precedent might not need to be referred to. However, a legal issue in court is very rarely clear-cut and easy to handle, without needing to make references to any previous decisions made by judges of the same or higher court.

“Overruling” a prior decision

One of the characteristics of common law is that it is flexible. Common law adapts to the ever-changing circumstances in law, as judges have the power to announce any new legal rules or change older ones that do not fit with the way law is applied today. While the previous decisions are there as guiding principles for newer cases, judges have the room to depart from them, given any different circumstances that may be a factor.

In Canada v. Craig, a Supreme Court case, the judge stated that overturning a precedent of the court is not a step that can be taken lightly. The court has to be satisfied based on very compelling reasons that the previous decision was made wrongly and should be overruled. Overruling a previous decision by another judge requires a lot of thoughtful consideration. It needs strong reasons that most of the judges in the court would agree with. Nonetheless, the principle of stare decisis is binding for the lower courts in the country, and there are serious implications if that binding nature is outright ignored.

Lower courts and their powers to depart from cases

So, do lower courts have any power to depart from judge-made decisions in previous cases? The answer is not a simple, yes or no. Precedent from higher courts, such as the courts of appeal in provinces or the Supreme Court of Canada (the highest court in this country), is definitely binding on lower courts, like trial courts. Nevertheless, these judges in the lower courts are free to apply their own analysis on the rules determined by the higher court, and the reasons for those rules. Upon that analysis, they can decide that in light of the actual facts in the dispute in front of them, the precedent applies, or they can distinguish the precedent-based on any factual differences between the cases.

This essentially means that the threshold to depart from a higher court’s decision is very high. Trial courts have to adhere to the binding precedent even if there is some evidence that the previous decision might have been wrongly decided. The threshold requires proof that the previous legal framework or the wider world, in general, has changed since the previous judgement. It has to be more than some evidence or just an alternative viewpoint on the issue. It has to be a fundamental shift, and this kind of shift can be very difficult to prove.

Even if there is strong and compelling evidence that signals the fundamental change in the circumstance, the issue still has to work its way up through the court system. Ultimately, it is only the Supreme Court of Canada that can overrule its own decisions. The principle of stare decisis relies on consistency and a commitment to the rule of law, which comes into question if judges of lower courts do not have a strong enough reason to depart from precedent.