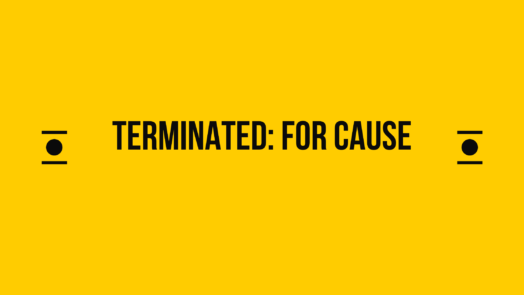 In addition, employees terminated for cause could be refused Employment Insurance (“EI”): Source

Nevertheless, not every allegation of cause is truly cause. In other words, just because an employer alleges a termination for cause does not mean cause actually exists at law. In fact, most employees can be reasonably sure that their employer will have difficulty establishing a termination for cause in case there is a wrongful dismissal lawsuit (see: Employment Litigation Manual, LexisNexis Canada Inc., § 10.20).

Terminated For Cause: Definition

The Ontario Court of Appeal has defined termination for cause as follows:

As discussed earlier, a termination for cause is a serious matter, and there is no middle ground — there is either cause or no cause. Indeed, the concept of “near cause” has actually been rejected by the Supreme Court of Canada:

The judgment of the Court of Appeal is set aside and the matter is remitted to the Nova Scotia Supreme Court to determine the reasonable notice which should have been given to the appellant for wrongful dismissal. We do not accept any argument relating to near cause.

A trial judge must instruct the jury to determine: (1) whether the evidence established the employee’s deceitful conduct on a balance of probabilities; and (2) if so, whether the nature and degree of the dishonesty warranted dismissal. In my view, the second branch of this test does not blend questions of fact and law. Rather, assessing the seriousness of the misconduct requires the facts established at trial to be carefully considered and balanced. As such, it is a factual inquiry for the jury to undertake. I conclude that a contextual approach to assessing whether an employee’s dishonesty provides just cause for dismissal emerges from the case law on point.

This principle necessarily rests on an examination of the nature and circumstances of the misconduct. Absent such an analysis, it would be impossible for a court to conclude that the dishonesty was severely fraudulent in nature and thus, that it sufficed to justify dismissal without notice.

As an example, in order to justify the termination for cause of a senior, long-serving employee, the alleged misconduct must be very serious and usurp any mitigating circumstances. In one case, the employer failed to prove a termination for cause even though the employee had allegedly accessed pornography at work, skipped important meetings, used company resources for personal reasons and performed poorly. The employee successfully argued that his 11 years of exemplary service outweighed his alleged misconduct. In another case, the employer failed to prove termination for cause despite the allegations that the employee swore at and assaulted his supervisor. The employee successfully argued that a single instance of poor judgment in the context of an otherwise unblemished record did not constitute just cause.

Here’s another helpful example. If someone works at a bar, and the bar had always sort of condoned giving a few drinks away for free to friends and family, it would not be just cause if the bar turned around and fired a bartender for giving his brother a few free drinks. Yes, it was theft (maybe), but based on the circumstances, it was not serious misconduct.

Read: More Examples Where There Was No Cause: Link

What Happens In The Event Of A Termination For Cause?

If an employee is terminated for cause, they are provided with no notice or severance upon their dismissal. At that point, the employee has two options: (1) accept the termination for cause and move on or (2) fight the cause allegations, arguing they are false or that even if true, they do not amount to cause based on all the circumstances. In regard to the latter, generally, employees fight a termination for cause by hiring a lawyer to negotiate with the employer or, failing that, launch a wrongful dismissal lawsuit in which the issue to be litigated is whether the employer truly had cause to terminate. If the employer wins, the employee gets nothing and has to pay the employer’s costs. If the employee wins, he or she gets his or her severance, his or her costs, EI, and, in some cases, if cause had been asserted in bad faith, an award of punitive damages.

Dutton Employment Law is a Toronto employment law group. Call us today for a free consultation to see whether the facts in any case amount to cause.