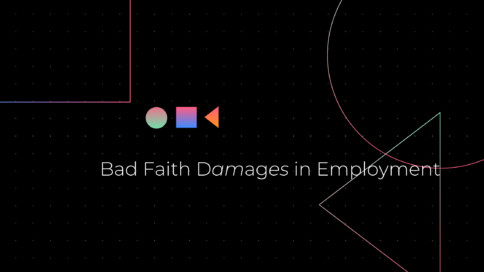 Until the late nineties, employees could, generally, only sue their employers for severance upon termination. There was, generally, no way for an employee to also sue his employer for the stress caused by especially harsh or “bad faith” conduct at the time of dismissal.

Then, in 1997, the Supreme Court of Canada, in the case of Wallace v. United Grain Growers Ltd., recognized for the first time an implied obligation for all Canadian employers to act with “good faith and fair dealing” with their employees. The Court went on to hold that where an employer fails to act with “good faith and fair dealing”, a lower court should extend the number of months’ severance that an employee was to be owed. As a result, Canadians could sue their employers for something on top of simple severance for virtually the first time.

At paragraph 103, the Court explained when employees could be entitled to compensation for breach of the employer’s duty of “good faith and fair dealing”.

…where an employee can establish that an employer engaged in bad faith conduct or unfair dealing in the course of dismissal, injuries such as humiliation, embarrassment and damage to one’s sense of self-worth and self-esteem might be worthy of compensation.

See also paragraph 96, where the Court explained how to compensate employee in case of a breach of the employer’s duty of “good faith and fair dealing”.

…employers ought to be held to an obligation of good faith and fair dealing in the manner of dismissal, the breach of which will be compensated for by adding to the length of the notice period.

The concept of these so-called “Wallace Damages” or “bad faith damages”, i.e., extra months of severance for breach of the duty of good faith and fair dealing, remained the law of the land for over a decade. However, many lawyers criticized these special damages because of the arbitrary nature of bumping up severance for some seemingly random number of months for a wide range of employer misbehaviour.

Then, in 2008, the Supreme Court of Canada revisited damages for breach of the duty of good faith and fair dealing in employment. In that case, Keays v. Honda Canada Inc., the Court would change how the oft-criticized so-called “Wallace damages” should be awarded.

In the result, the Honda Court held that “bad faith damages” were to no longer be awarded by way of an arbitrary extension of the severance period a la Wallace. Rather “bad faith damages” should be regular-old “aggravated damages” (a concept that existed in other areas of the law for damages). As a result, to be entitled to “Honda Damages”, under the old common law, the employee would now have to prove that his employer acted in bad faith and that he suffered losses because of the bad faith behaviour, not just because there was simply bad faith behaviour per se.

Following Honda, the law of the land for “bad faith” damages is this: An employer has a duty not to use unduly unfair or insensitive methods when terminating an employee. However, the employer’s mere sloppy conduct does not suffice for such bad faith damages; it takes something akin to intent, malice, or blatant disregard for the employee. Moreover, so-called “Honda damages” (i.e., “bad faith” or “aggravated” damages) are limited to compensating loss and are not “punitive”. Therefore, an employee must prove losses (other than their job), not just bad behaviour.

Regarding the calculation of Honda damages caused by an employer’s bad faith conduct at the time of the termination, the Honda Court ended the old Wallace damages practice of arbitrarily extending the number of severance months. Instead, the Court held that the number of monies awarded should compensate for the employee’s actual losses:

[I]n cases where damages are awarded, no extension of the notice period is to be used to determine the proper amount to be paid. The amount is to be fixed according to the same principles and in the same way as in all other cases dealing with moral damages. Thus, if the employee can prove that the manner of dismissal caused mental distress that was in the contemplation of the parties, those damages will be awarded not through an arbitrary extension of the notice period, but through an award that reflects the actual damages.

As for proving the number of monies to be awarded in case of bad faith conduct at termination, the employee must present evidence of harm caused to him and proof that the employer’s bad faith conduct caused such harm. For example, an employee would have to prove he suffered some illness from the bad faith termination (e.g., weight loss, prescriptions, loss of sleep, loss of happiness, etc.).

As an example of calculating bad faith damages, consider the recent case of Boucher v. Wal-Mart Canada Corp., in which the Ontario Court of Appeal upheld an extraordinary $200,000 in bad faith damages award against Wal-Mart. In Boucher, the damage award flowed from how Wal-Mart dealt with the misconduct of one of its employees, Mr. Pinnock, and Ms. Boucher’s complaints about that misconduct targeted towards her. As Laskin J.A. explained, at para. 72:

Wal-Mart took no steps to bring an end to Pinnock’s misconduct. It did not take Boucher’s complaints seriously, finding them unsubstantiated despite substantial evidence from co-workers that they were well-founded. It failed to enforce its workplace policies, which on their face were designed to protect employees from the kind of treatment Pinnock subjected Boucher to. And it threatened Boucher with retaliation for making her complaints, an especially vindictive act. Despite all of this, Boucher was willing to continue to work at the store if Wal-Mart addressed her complaints about Pinnock. Only when Wal-Mart refused to do so, did Boucher resign. These considerations show that Wal-Mart’s own conduct justified a separate and substantial award for aggravated damages.

In response to Mr. Pinnock’s conduct and Wal-Mart’s failure to do anything about it, Ms. Boucher experienced stress, could not eat or sleep, and suffered from various medical symptoms, including weight loss. She was prescribed a sedative and referred to a psychiatrist. Her symptoms cleared up once Mr. Pinnock was no longer a part of her life. For this “bad faith” treatment, as mentioned above, she was awarded $200,000 in so-called “Honda” damages.

What Constitutes Bad Faith In Employment?

Accordingly, determining whether an employer is liable for bad faith damages can be a challenge. Still, in some cases, it will be easy. For example, in Zadorozniak v Community Futures Development Corp, the employer had the employee escorted out and put in a police car on the main street of a small town at the time of his dismissal and this was considered “bad faith”. In another case, however, it wasn’t so easy. In Mulvihill v. Ottawa (City), a lower court decision to award a municipal employee bad faith damages on the grounds that (1) the employer had initially dismissed her for cause, but had then withdrawn the allegation of cause immediately before trial of her action for wrongful dismissal, and that (2) she was dismissed while on sick leave, was reversed by the Ontario Court of Appeal. The Court of Appeal found that the employer’s conduct fell short of the kind of bad faith conduct that would warrant bad faith damages:

Wallace instructs employers to be “candid, reasonable, honest and forthright” in the course of dismissal. There is nothing in the Dismissal Letter that was untruthful, misleading or insensitive. The City was candid, honest and forthright about why it was dismissing Ms. Mulvihill. It explained that her employment was terminated because the City viewed her actions as insubordination and it explained the specific conduct that gave rise to that view…. It cannot be said that the City’s position was unreasonable. As I have explained, the City held and acted on an honest, reasonably held belief that Ms. Mulvihill’s conduct constituted insubordination amounting to just cause for dismissal.

The mere fact that Ms. Mulvihill was on sick leave at the time of termination does not necessarily mean the dismissal was conducted in an unfair or bad faith manner. There must be other evidence of bad faith, unfair dealing or “playing hardball”, such as cancellation of accommodation for an employee’s illness as a reprisal for the employee having made a human rights claim: see Keays v. Honda Canada Inc.,

Read More: All the Kinds of Remedies in Employment Law

Dutton Employment Law is an employment law group at Monkhouse Law. Whether you are an employee or an employer, call us for a free consultation to advise on your situation.