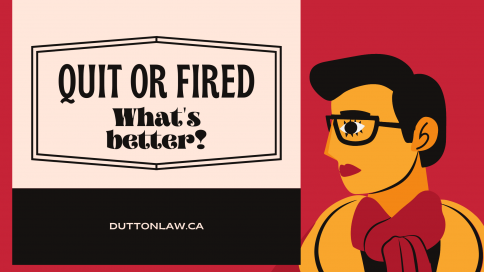 Employees who quit are not entitled to severance. Employees only get a severance package if they are fired.

With regard to the negative perception associated with getting fired, I believe the effect is overblown. Sure, quitting looks better than getting fired, but millions of people have been fired and moved onto better careers. Thus, I would put forth that the real reason most people suggest that it is better to quit than to get fired is “ego”.

Nobody likes getting fired. Everyone wants to leave work on a high note. Certainly, getting fired is a bruise to the ego. However, is an ego worth up to 24 months severance, which is generally the maximum amount of money one can get if they are terminated from work?

Take, for example, Randy. Randy worked at Widget Corp for 30 years, moving up the ranks from a labourer to a manager. Randy is 60 years old. Randy earns $100,000 per year.

Randy gets in a fight at work with his boss. Randy is distraught. Randy is so mad he is considering quitting.

Randy would be making a big mistake if he quit.

As a 30 year manager who makes over $100,000 per year, Randy would likely be entitled to around 24 months severance if he waited it out until he was fired. In other words, if Randy quits, he would lose $200,000. Unless Randy were wealthy already, it would not be worth the ego boost that quitting would enable Randy.

Some employers may offer to pay retiring employees a retirement package that is identical to a severance package, which could be a win/win.

However, not every company offers retirement packages, and they don’t have to either. Therefore, employees who aren’t offered a retirement package should not quit and instead wait to get fired with a severance package.

Before asking an employer for a retirement/severance package when an employee is ready to retire/resign, employees with long-standing service should speak to an employment lawyer. Employees must tread carefully and they should be equipped with knowledge regarding the rights of both himself and his employer.

What About Your Employment Record?

Some people believe that quitting is better than getting fired because it will show up on your record that you were fired, which is a bad look for future employers. However, this is not true. There is no such thing as an employment record. Future employers have no way to know whether someone was fired or quit.

Nevertheless, in some scenarios it is perhaps better to quit than be fired especially if someone is looking for a new job. For high-level jobs, many job interviews may ask the question, “why did you leave your last job?” Objectively speaking, it is better to say that you quit to find a new job than it is to say you were fired. However, you can avoid this situation by waiting to get a new job offer before you quit. That way, the job interview will not ask you why you left your last job.

What About Constructive Dismissal?

Constructive dismissal is a term used to describe:

“A change in an employee’s job responsibilities and/or benefits so significant that, viewed objectively, the employer would be deemed to have radically altered the nature of the employee’s service contract. If such occurs, the employee is justified in resigning his or her position and maintaining an action for damages as if actually dismissed without cause.”

Want To Get Fired To Get A Severance?

I’ve spoken with some employees who want to get fired so they can get a severance package. My advice to them is always the same. First, consider this: Is your workplace so toxic that it could be a constructive dismissal anyways? Second, consider your age and seniority – are you close to retirement? If so, perhaps the employer will be more inclined to offer severance. If neither applies, I advise that the chances are extremally small and that it could backfire (it is perhaps one of many factors to build a case for just cause), so it might be better to stick around at least for the short term and see what happens or walk away with nothing, but on your own terms.

If someone is asked to resign, it could be that the employer doesn’t want to pay severance. In that case, the employee should not resign and instead speak to an employment lawyer immediately.

Related: Can You Take Back a Resignation?