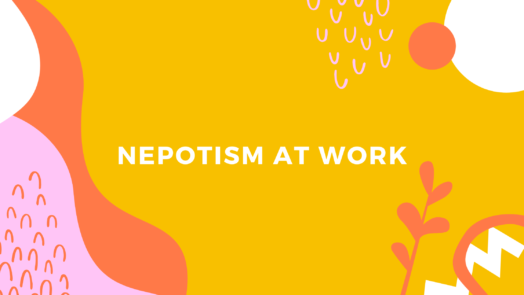 Nepotism in the workplace

Nepotism is defined as favouritism toward relatives or personal friends by those in power, who, because of their relationship rather than their abilities, receive special treatment (source). Nepotism is contrasted to “meritocracy”.

Nepotism in the workplace is when someone is chosen for a job or given special treatment because of a close relationship with someone in a position of power at work. Some examples of workplace nepotism include:

Nepotism is legal. In Ontario, there is no statute or common law that makes nepotism illegal. Employers are free to have nepotism in the workplace.

Furthermore, there are no minimum standards for fairness and transparency in employment that prevent nepotism.

With regard to human rights law, section 24(1)(d) of the Ontario Human Rights Code goes so far as to emphatically state that the right to equal treatment with respect to employment is not infringed where an employer grants or withholds employment or advancement in employment to a person who is the spouse, child or parent of the employer or an employee.

Problems of Nepotism in the Workplace

Despite the lack of laws on nepotism, employers should still be aware that nepotism can be toxic to the workplace. Non-family employees may come to resent family members or close friends hired by the employer. A sense of bitterness may poison the workplace (source).

At the same time, nepotism can slow growth and innovation. Emotional ties between people who are related may negatively affect their decision-making abilities. (source).

In addition, personal relationships and fraternization between coworkers often lead to tempestuous breakups, emotional trauma and even harassment at the office (source).

Furthermore, nepotism can lead to a conflict of interest. Everyone remembers the plot line from The Office where Michael was dating Jan at the same time she was suing the company.

Avoiding Nepotism in the Workplace

In order to avoid the toxicity and innovation drain that nepotism can bring employers, they should consider enacting an anti-nepotism policy. An anti-nepotism policy is simple enough to write that a non-lawyer could it. It could simply match the guidelines recommended in the oft-cited article,  Family Business Succession: The Final Test of Greatness. (Aronoff, Craig E., and John L. Ward., Business Owner Resources, 1992), which recommends family members (and/or close friends) meet three qualifications before they are able to be hired:

Aronoff and Ward also recommend that junior family members begin their employment with the employer by working part-time during their school years.

Moreover, Aronoff and Ward recommend that employers who hire family members should make it clear to the office that they can and will be terminated for misbehaviour and poor productivity, regardless of their family connection.

Be careful, however, especially in jurisdictions outside Ontario, in drafting an anti-nepotism policy to ensure it is not overly broad. One thing to keep in mind is that “total bans” on hiring family members may be discriminatory.

In one case, in Bossard (Town) v. Quebec (Commission des droits de la personne) [1988] 2 SCR 279, the town of Brossard adopted a hiring policy disqualifying members of the immediate families of full‑time employees and town councillors from taking up employment with the town.

Broassard complained to the Quebec Human Rights Commission when her application for summer employment with the town as a lifeguard was not considered, pursuant to the anti‑nepotism policy because her mother worked as a full‑time employee at the municipal police station.

The Commission found that Broassard had been wronged and recommended that she be immediately granted the position for which she had applied.

The town then sought a declaration from the Superior Court that the hiring policy did not constitute discrimination under s. 10 of the Quebec Charter of Human Rights and Freedoms. The Court dismissed the motion but the Court of Appeal reversed the judgment. Then, the Supreme Court of Canada had to determine whether the town’s hiring policy constituted discrimination in employment based on “civil status” contrary to ss. 10 and 16 of the Quebec Charter; and, if so, whether the exclusion of members of the immediate families of full‑time employees and town councillors is deemed non‑discriminatory pursuant to one of the exceptions provided for in s. 20 of the Charter.

In the result, the Supreme Court held that the “total ban” on hiring family members was discriminatory. The court stated:

Obviously, if the hiring of relatives becomes the rule rather than the exception, the perception of “packing” the administration will undermine the public’s confidence in the integrity of its senior public officials. But again I think it is a question of degree and of evidence and that a total ban has not been shown to be required in this case. I do not for a moment disagree that an abundance of caution should be exercised by municipalities in order to avoid the appearance of preferential treatment being accorded to the relatives of council members and existing staff. But I think that a total ban goes too far here. The value designed to be protected by anti‑discrimination legislation, namely that people be dealt with as individuals and on merit, seems to me to be too important and too fundamental to be overborne by a rigid policy of anti‑nepotism if less drastic means are available to protect the integrity of the town’s administration and the appearance of such integrity. I think less drastic means are available and could and should have been employed in this case.

Dutton Employment Law is an employment group at Monkhouse Law that focuses on executive employment law across Ontario. Call us to speak to a legal professional now.