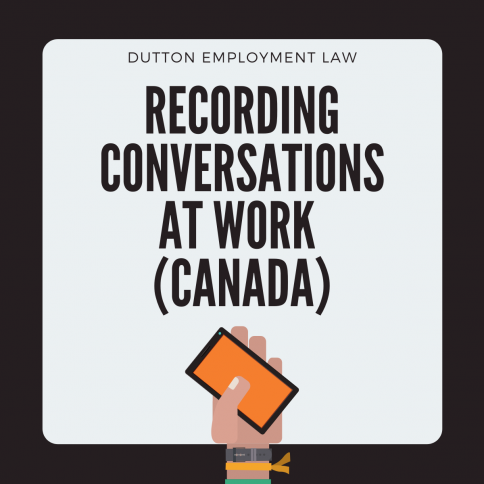 Inevitably, some employees will find themselves in the difficult position of having to attend a disciplinary or investigatory meeting with a supervisor or HR. Many workers in this difficult position are wondering, “can I secretly record the meeting in Canada? Is it legal to record a conversation without everyone’s consent in Canada?”

Likewise, some employees will one day find themselves in the painful situation of workplace bullying and harassment. Accordingly, many in this unenviable position ask me, “in Canada, can I record my colleague bullying me?”

At the same time, some employers want to know as well, can they record an employee misbehaving? Can they surreptitiously record an investigation meeting concerning an employee’s alleged misbehaviour?

Is it legal to record your conversations at work (Canada)?

For example, it is not illegal to record your meeting with your supervisor, but it is illegal to plant a recording device in the meeting between your supervisor and someone else if you are not present at that particular conversation.

However, when we speak about “legality” we are only speaking about criminal offences. Thus, although you can “legally” secretly record a conversation without being charged with a criminal offence, you can still suffer other consequences such as being fired or sued.

Can I record a conversation with my boss (Canada)?

Will I be fired if I record a conversation at work?

You can be fired for any reason in Canada or no reason at all. In this regard, yes, of course, you will likely be fired for secretly recording a conversation with your boss.

To that effect, if you are caught recording your boss at work, then your employer can either fire you on the spot without cause (and pay you severance) or it can argue you are fired for cause and pay you no severance.

Thus, the question become, does secretly recording your meeting with your boss amount to “just cause”? The answer: It depends. If the secret recording sufficiently causes your employer to lose all trust in you, then perhaps you can be fired for just cause. After all, just cause is defined as “serious misconduct” (See Regina v. Arthurs, 1967 CanLII 30 (ON CA)) and secretly recording your boss is likely “misconduct”. Whether or not it is “serious” misconduct will depend on the circumstances. Nevertheless, we do know that courts have held that if the employee’s conduct reveals a character which is dishonest or untrustworthy, just cause is more likely (see Ennis v. Canadian Imperial Bank of Commerce (1986), 1986 CanLII 1208 (BC SC)).

In Hart v. Parrish & Heimbecker, Limited [2017] MBQB 68, a Manitoba court considered whether an employee’s secret recordings with management, among other concerns, was “just cause”. Although the court found that just cause was justified for other reasons, the court did opine on the problem with the employee’ secret recordings:

In addition, in certain industries, it may be easier to justify a “just cause” dismissal if an employee secretly records a conversation at work. For example, a relationship of trust has been found to be particularly critical in the banking industry where employees are held to a higher standard of trust than employees in other commercial or industrial undertakings (see, for example, National Bank of Canada v. Lepire, 2004 FC 1555; and Rowe v. Royal Bank of Canada (1991), 1991 CanLII 912 (BC SC)).

In addition, employees who work with greater autonomy are held to a higher standard of trust. The greater the autonomy the employee enjoys, the more fundamental trust becomes to the employment relationship (see Godden v. CAE Electronics Ltd., 2002 BCSC 132).

Can I record a conversation with my bully?

Are secret recordings admissible in court in Canada?

The law is mixed on whether a secret recording is admissible in court and there is no case law in the employment law context. Thus, secretly recording your boss is a risk that might not even pay off.

In labour arbitrations, arbitrators will either reject a secret recording based on the labour law theory that admitting it would erode the future bargaining relationship between the union and employer or accept the secret recording based on the common law theory that anything relevant should be admitted. In line with the latter theory, in one case, a judge in a family law matter said:

[secret recordings are] generally not prohibited or illegal… [and] can constitute real evidence of conversations or events that they depict, as long as the other side is aware before the hearing date that these recordings exist and are being relied upon…[a]ccordingly, short of certain specific privacy expectations, there are few in any restrictions on the admissibility of [secret] recording of conversations or events.Mazur v. Corr, 2004 ABQB 752 (CanLII)

Yes, an employer can record an employee at work legally so long as there is an employer representative in attendance in the conversation being recorded. However, the information that is collected in the recording will be subject to privacy legislation.

Where the employer is located, and depending on whether they’re provincially or federally regulated, a provincial privacy act or the federal Personal Information Protection and Electronic Documents Act (PIPEDA) addresses the collection, use and disclosure of personal employee information (see this Monster.com article).

In any event, any employer seeking to record employees should have a written policy in line with applicable privacy legislation and the employer should make all employees sign a contract that says they have no expectation of privacy at work.