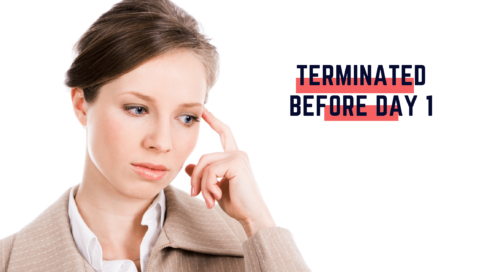 Generally, whenever someone in Ontario is fired before they start their first day of work, they are entitled to severance (also known as ‘reasonable notice’) just the same as someone who had worked several years for the employer. The same applies to employees whose accepted offers are withdrawn or rescinded.

The Law of Dismissal: Absent a contractual term stating otherwise, an employee who is terminated without cause is entitled to reasonable notice (also known as ‘severance’). That proposition holds true even where the termination occurs before the employee has started work: DeGagne v. City of Williams Lake, 2015 BCSC 816 and Buchanan v Introjunction Ltd., 2017 BCSC 1002.

Read More: All about probationary clauses

First, on its face, the probation clause provides that the three-month probation period commences as of the effective date of November 1, 2016. Thus, it was not in force on October 29, 2016, when the defendant retracted the Contract. Had the defendant intended to maintain a right to terminate the Contract without notice at any time after execution, it could have included a term to that effect.

Summary for Employees: Termination Before Employment

When an individual accepts a job, he or she instantly becomes privy to an employment contract. This is true even if the individual did not sign any written document.

If an employer decides to terminate an individual before they were to start work, it is a breach of contract. In the result, the employee would be entitled to a couple of months of severance, generally. Call us for a free consultation to calculate how much severance you may be entitled to.

Summary for Employers: Termination Before Employment

Employers who wish to avoid paying severance in case of termination before employment begins should use written employment contracts at the time of the job offer. Very importantly, the employment contract should include a probationary clause that begins immediately, not on the date the employee was supposed to start working. Also very importantly, the probationary clause should only last three months, otherwise, it is void.

Dutton Employment Law is an employment law group located in downtown Toronto on Bay Street. Call us for a free consultation to advise on your employment law issues now.