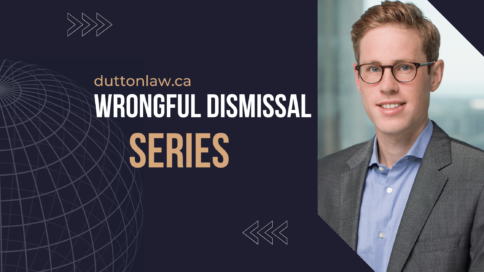 However, if you were terminated without cause for no real reason or business reasons like downsizing, then your employer can’t tell that or imply that you were fired for cause for serious misconduct, otherwise it would be defamation.

Accordingly, unless your employer is lying about your reason for termination, i.e., defaming you somehow, it can say whatever it wants about your exit. Your employer can lawfully tell your current colleagues and your future employers that it fired you.

For cause terminations are exceedingly rare and are generally only reserved for serious workplace misconduct like deceit, theft and gross incompetence.

On the contrary, without cause terminations are the norm by far and cover the vast majority of terminations.

Lying about the character of an employee is defamation, and that is illegal.

What is defamation? Generally, defamation is saying something about another person that lowers the reputation of that person in the eyes of a reasonable person: Grant v. Torstar Corp., 2009 SCC 61, [2009] 3 S.C.R. 640, at para. 28.

In the workplace law sphere, it is defamatory to say or suggest that an employee has been guilty of dishonest or disreputable conduct.

However, as hinted to above, employers have a defence to defamation if what they are saying or suggesting about someone is true. To that end, if an employer fires someone for cause, for theft for example, then the employer has an absolute defence to claims of defamation brought by the employee if the employee actually stole something and was fired for it.

Accordingly, if an employer says an employee was fired for serious misconduct like theft, but that is false or misleading or impossible to prove, then the employer has no defence to defamation and would be liable to pay the employee damages. This raises a more common issue of when an employer suspects an employee did something wrong but cannot prove it or does not reasonably try and prove it, and fires them for it for cause, and then tells future employers about it. This could be defamation because the employer cannot rely on the “truth” defamation defence.

For example, in one case in Ontario, Hampton Securities Limited v. Dean, 2018 ONSC 101 (CanLII), an employee successfully sued her employer for defamation when the employer alleged to a third party (her securities regulator) that she was dismissed for cause for “failing to follow trading desk policies & procedures – unauthorized trading resulting in losses.” In other words, the employer implied the employee was guilty of very serious, career-ending misconduct in reference to her role as a registered securities broker.

The employer’s statement was per se defamatory, impugning the very character of the employee in regard to her chosen profession, and the employer in fact admitted the comments were defamatory at trial. However, as is the case in most other matters, the employer tried to rely on the absolute defence of truth. In other words, the employer argued that yes what it said was hurtful to the employee’s character, but that it was the truth, so it was allowed to say it.

However, it turned out that the employer did not even have any evidence that the employee actually conducted unauthorized trading, so the truth defence failed, and the judge strongly sided with the employee, going so far as to award extraordinary damages against it:

[196] Punitive damages are the exception rather than the norm. This is an exceptional case….[197] Hampton filed a NOT containing allegations that go to the heart of a trader’s integrity: the duty to exercise the power to trade strictly within the authority they are given. Hampton knew the allegations would be available to all potential employers of Ms. Dean. Hampton made the allegations when it knew or ought to have known they were untrue. Hampton knew or ought to have known that the allegations were fatal to the prospect of Ms. Dean obtaining future employment in the securities industry in a position involving any material degree of discretion, independence or responsibility….[203] This is the exceptional sort of case in which courts should award punitive damages. For an employer to conduct itself in this way is, in my view, so “extreme in its nature and such that by any reasonable standard it is deserving of full condemnation and punishment”…

Conclusion: What Employers Can And Cannot Say About Terminations

In summary, employers can tell other people anything about an employee’s termination so long as it is true. Employers are forbidden from lying about the reason for termination and they are forbidden from implying someone was terminated for serious misconduct if they failed to investigate that it was even true that the misconduct occurred. Thus, if an employer ever wants to tell a third party anything that could hurt an employee’s character, it had better make sure it is true and even collect evidence to prove it is true in case it is ever sued.

Dutton Employment Law represents employees and employers in Ontario employment law matters. Call us for a free consultation to discuss your matter.