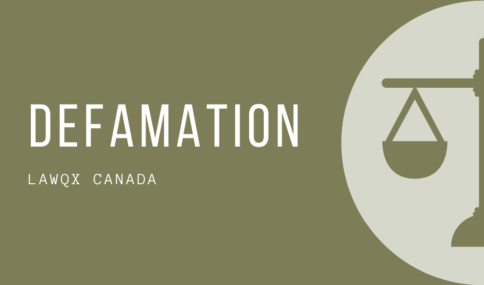 Defamation in Canada varies from province to province. In Ontario, legislation on defamation is found in the Libel and Slander Act.

What are the types of defamation?

Libel is defamation with a permanent record. Libel is usually made in written form and traditionally associated with print media, but also applies to other forms of communication such as an email, radio, TV broadcast, newspaper, etc. With the advent of the internet and social media, libel is more likely to be found on the internet.

Slander is defamation with no permanent record such as oral communication, gestures or signs.

What are the Elements of Defamation?

For a defamation lawsuit to be successful, whether, for libel or slander, the plaintiff must demonstrate:

However, a plaintiff suing for slander will have to show that he/she suffered damages or financial loss as a result of the slander.

Once these three elements of defamation have been established, whether for Libel or Slander, the onus shifts to the defendant to provide a valid defence.

Check Out: Can Your Employer Say You Were Fired?

What are the Defences to Defamation:

Justification looks at what is true; something that is true cannot be defamatory. If the defendant can prove that the words are true, then a claim of defamation cannot succeed.

Qualified privilege can act as a defence for otherwise defamatory words on certain occasions. Qualified privilege attaches to the occasion, not to the communication of the parties. Once the occasion is shown to be privileged, the defendant is free to publish remarks about the plaintiff that may be defamatory and untrue. To establish that an occasion is privileged, the defendant must prove:

Qualified privilege is sometimes a defence when employers are sued for bad references.

Fair comment is a defence for defamatory comments on matters of public debate. The central purpose of the defence of fair comment is to protect the value of free expression. The fair comment defence will apply where all of the following are true about the comment:

The defence of responsible commutation on matters of public interest may be of particular interest to media entities and will apply where:

Malice- for the defences of fair comment and qualified privilege :

The defences of fair comment and qualified privilege can be defeated if the plaintiff can demonstrate that the defendant was motivated by malice. Malice will be found if the following is applied to the comment(s):

What are the remedies awarded for defamation:

Damages are monetary compensation for the harm to the plaintiff’s reputation.

For a more comprehensive discussion on the types of damages available for lawsuits, visit the Ministry of the Attorney General website.

An injunction usually takes the form of an order preventing or restraining the defendant from publishing further defamatory material about the plaintiff. Injunctions are commonly awarded in addition to monetary damages.