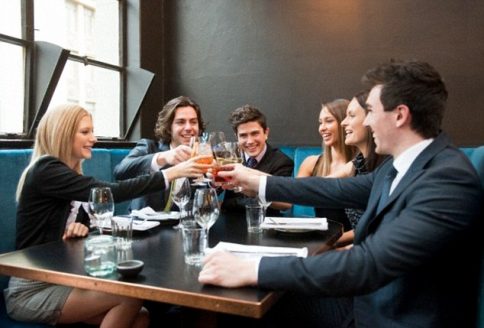 Is Drinking at Work Just Cause for Termination?

Employees can be terminated at any time for any reason so long as the employer provides notice. However, in certain situations employers can terminate employees without notice if they have “just cause” to terminate the employee. Thus, the question becomes, does drinking at work constitute “just cause”? The answer, like most employment law issues, is that it depends on the circumstances.

Consider the most famous drinking at work case: Ditchburn v. Landis & Gyr Powers Ltd., 1997 CanLII 1500. There, a sales person took his most important client to a strip club where they got quite drunk. Afterword’s, they got into an argument about politics, which resulted in a physical fight wherein injuries were sustained. The sales person was later fired and a lawsuit followed. In the result, the Ontario Court of Appeal found that just cause was not warranted in the circumstances. Why?

What is the Test for Just Cause for Drinking at Work?

Just cause is the death penalty in employment law. Accordingly, in case of drinking at work, just cause can only be justified where the drinking at work causes grave concern. As one authority wrote, with respect to the issue of alcohol at work, the standards to be applied are those of men, not of angels (The Law of Dismissal in Canada, Third Edition, 6:20:140).

For a relatively minor infraction, like drinking a single beer or two at a business lunch, it has been held that an employer will not have grounds to summarily terminate a long standing employee with a good record. For instance, in Patzner v. Piller Sausages & Delicatessens Ltd., [1990] O.J. No. 177, the Ontario District Court found at paragraph 10:

I am mindful of the defendant’s concerns over the plaintiff’s drinking on February 19. He was a foreman and should not have been setting such an example for the workers under him. Although there were no specific rules against drinking at the work place, he ought to have known that it would not be tolerated. However, given that it was an isolated incident by a lifetime, loyal and trusted employee, the defendant had other options available to it. It could have reprimanded the plaintiff in front of his co-workers. He could have been suspended for a period of time. Instead, the defendant brought out the guillotine and fired him. In my view, this was excessive punishment.

the proper questions of fact to be decided, where the dismissal is justified on the ground of drunkenness, would be: “Was the plaintiff so conducting himself that it would be injurious to the interest of the defendants to have kept him; did he act in a manner incompatible with the due and faithful discharge of his duty; did he do anything prejudicial or likely to be prejudicial to the interests or reputation of his master?”

Indeed, the courts have even held that actual intoxication at work does not automatically justify summary termination. In case the employee was actually intoxicated (i.e. drunk), the circumstances of the intoxication and the nature of the work must be considered as part of a contextual analysis in justifying just cause. In that regard, the Ontario Superior Court in Dziecielski v. Lighting Dimensions Inc., 2012 ONSC 1877 stated that:

Intoxication at work does not automatically justify termination. Again, the circumstances of the intoxication and the nature of the work in question will provide part of the context that must be considered by the employer. Where for example the job requires drinking alcohol with potential clients, intoxication alone should not be sufficient to establish cause. On the other hand an aircraft pilot who is intoxicated before a flight may be dismissed with cause due to the relationship between the conduct and the essential features of the work.

Thus, taking the above cases into account, the law on just cause and drinking at work can be summarized by the following contextual test:

Just cause may be appropriate if the employee was:

However, the courts will analyze every fact, and no case is the same. For example, a “zero tolerance policy”, does not automatically result in just cause in case of drinking at work, but it may be an aggravating factor. Conversely, mitigating factors may too be analyzed to find that just cause was not warranted. For instance, some courts have been less likely to find just cause was justified in case of drinking at work if the employee was long-tenured and had a clean record.

Finally, this “contextual” analysis could also apply to drugs in the workplace. For instance, in Soplet v. Bank of Nova Scotia, 2007 CanLII 47145, an employee bought marijuana from a co-worker at work at a bank. The arbitrator there held that just cause was not appropriate, considering there was no damage done to the bank and the employee had a solid record.