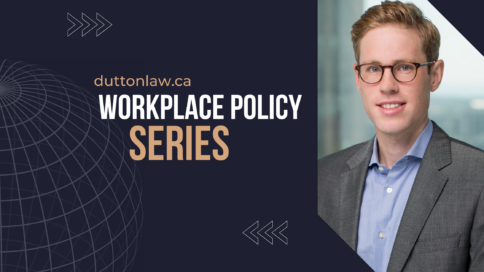 Regarding just cause dismissals, the law is not clear; there is no case law about non-unionized employees being dismissed for just cause for failing to get the vaccine yet, let alone the booster. However, in my opinion, a future court will likely hold that, on its own, refusing to get the booster will not amount to just cause. I will use twelve points to make my argument, each cited with appropriate sources.

Just Cause: Dismissal for misconduct with no severance (very rare).

Without Cause: Dismissal for any reason with severance (very common).

An employer generally has unfettered rights to issue and enforce policies affecting employees, and a breach of such policies can result in a termination for cause. However, just because a policy says an employee can be fired for cause for breach of such policies does not make it so. The common law of just cause still applies. And the common law of just cause is a difficult hurdle for employers to surpass. Number one, the employer must prove its covid booster policy is reasonable. Number two, the employer must prove that an employee refusing to get a booster in the face of the policy requiring it was both serious and wilful misconduct.

First, I believe that in the future many Canadian employers will generally be unable to prove that a policy requiring boosters is reasonable. More on this in the section below.

Second, whether or not an employer can prove that an employee refusing to get a booster was both serious and wilful misconduct will depend on each specific case and for this I will just repeat what my colleagues at Monkhouse Law said about the first two does:

… if an employer fails to consider the employee’s history of employment (such as a lack of disciplinary history), and fails to enact progressive discipline, justifying a for cause dismissal will prove difficult…. If you are an employee with a history of misconduct and with progressive discipline taken against you, a blanket refusal to abide by a mandatory vaccination policy or alternative measures may tilt the scale in favour of the employer.

Whether a Workplace Requirement for a Booster is Reasonable

Future courts will likely agree that the boosters limit transmission, severe outcomes and deaths, particularly for people near the end of their natural lives.

Hence, in some cases, a mandatory booster shot requirement will be reasonable, for example, in healthcare settings and institutional residences for the elderly or otherwise near death.

In many other cases outside these settings, however, I would put forth that it will be difficult to prove a policy forcing a mandatory booster shot is reasonable.

First, the timetable for when someone can get a booster makes it unreasonable to mandate them at present time. If someone is double dosed, it could take three months before they can get a third dose. If someone is single dosed, it could take up to six months to be medically cleared and to book an appointment to get a second then third dose depending on the brand of the vaccine. And if someone is completely unvaccinated, it could take up to nine months. In the future, it is even more problematic. The fourth and fifth doses, etc. will supposedly be variant-specific and may only be given a year apart like the flu shot.

Second, at any given time, boosters can only conveniently be available from “mixed and matched” sources even though public health bodies have stated they prefer individuals to get a booster from the same vaccine as their first two doses. This causes obvious trepidation among the public.

Third, mandatory vaccine policies are only as reasonable as the vaccines themselves. To that effect, there is now new evidence from legitimate sources that vaccines are becoming less effective at preventing disease than before. This argument will be weighed against the clear consensus that vaccines prevent severe outcomes and death as discussed above. If the vaccine was a sure bet panacea, no judge would refuse a vaccine mandate, but that isn’t the case, unfortunately. And, anecdotally, this is causing some apprehension among workers.

Fourth, judges will not ignore the evidence that natural immunity protects against the disease, perhaps even better than the vaccine. To that effect, a judge may find it may be unreasonable to require boosters, particularly where a large majority of a worker population has now had covid because of Omicron. Dr Fauci himself has even said covid “will find just about everybody”.

Fifth, we are at the point of the pandemic where a consensus of public health bodies believes that covid will not be eradicated and that we have to live with the virus like the flu. In that regard, no judge in the Ontario employment law context has ever held that termination for cause was reasonable for refusing a flu vaccine (this is probably because very few non-unionized workplaces had flu vaccine policies, to be fair).

Sixth, public sentiment is shifting. While a strong majority of Canadians once agreed with mandatory two-dose vaccination, much fewer people agree with mandatory boosters and I would expect this disparity to increase. Indeed, not even a majority of Canadians support mandatory vaccinations as a way to end the pandemic anymore. This is reflected in the fact that Canadians are not nearly rushing out to get the booster as fast as they did for doses one and two. Courts will be reluctant to marginalize a greater number of people, especially when experts are predicting that the end of covid could “tear us apart” if we aren’t careful.

Seventh, achieving high first and second dose coverage remains the focus and main priority of all governments’ vaccination programs. Boosters are not recommended as broadly as doses one and two. And, importantly, just a two-dose vaccine qualifies as “fully vaccinated” by for example Ontario and Canadian government passport restrictions. In short, without universal recommendations from public health bodies, it is hard to see a broad booster mandate upheld as reasonable at most workplaces.

Eighth, nearly 80% of eligible Canadians are fully vaccinated with two doses. Those who are fully vaccinated with two doses continue to demonstrate milder cases than those who are unvaccinated, making booster mandates less urgent. The fact is, the decision to vaccinate is a private, personal decision that judges will be reluctant to impose upon vaccine-hesitant employees in perpetuity, particularly where a two-dose vaccine still works. There will be a time when a judge draws a line in the sand.

Ninth, judges may rationalize that employers’ time and energy should be spent on convincing employees to vaccinate doses one and two. Employers, especially small ones, don’t have unlimited resources, so maybe focusing on two doses is better than time spent convincing deeply reluctant individuals to get three doses. Things need to be put into perspective: two doses is better than none.

Moreover, judges may opine that employers have less punitive tools in their toolbox to limit spread. For example, sick days for the symptomatic or N-95 masks for employees who want them, to name just two. Labour arbitrators now believe a vaccine or weekly test system is reasonable. Perhaps judges will decide the same.

Tenth, trust and goodwill in respect of public health are falling. A Quebec judge, for example, may opine that too much trust and goodwill was squandered on unscientific restrictions, from closing swing sets to curfews to a tax on unvaccinated Canadians. Perhaps this judge may find that the public’s increasing lack of trust makes a mandatory booster unreasonable.

Eleventh, mainstream experts agree Omicron is clearly a milder variant and perhaps this is a sign of the future. We don’t know and can’t know, but if the virus behaves every respiratory disease season with waves of new, but increasingly less deadly variants not unlike the difference between Delta and Omicron, judges will be less likely to enforce booster mandates because of the lack of risk to the public and to the workplace. Courts may assert that we are not in “Kansas March 2020” anymore.

Lastly, judges will need to weigh the reasonableness of booster mandates in terms of industry. A judge may find that an accounting firm, whose workers now largely work from home, has less reason to force a vaccine on the unwanting. Another judge, presiding over a wrongful dismissal trial concerning a dentist’s office, may find that requiring boosters for workers is quite reasonable because of their close contact with patients’ mouths and noses.

In summary, I would put forth that in the not too distant future, after the end of the Omicron surge, after the point in time when both the public’s sentiment and public health’s expert opinion has shifted to learn to live with the virus, judges may hold that the above-noted factors against booster mandates outweigh the reasons in favour of booster mandates.

There is one small caveat though: In extremely rare cases, human rights law will protect employees from being fired even without cause when a doctor determines they are in danger from life-threatening side effects and local public authorities have approved their exemption. No bona fide religious exemptions to mandatory boosters exist – no religion in Canada that I know of forbids covid vaccines or boosters.