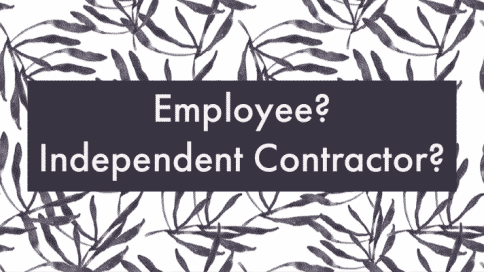 In addition to ESA standards, it is an advantage for an employer to classify a worker as an independent contractor because they have no obligation to contribute to tax, EI and CPP and pay for WSIB.

However, in many industries, the worker gets little benefit from being classified as an independent contractor because they can’t really make meaningful deductions anyway except for one or two things. For example, a pizza delivery driver may be classified as an independent contractor by his employer and he may think this classification is an advantage because he gets to write off the cost of his car and gas. However, he is losing far more money on lost vacation pay, overtime pay, even minimum wage. In most cases, the employer is getting a far greater advantage at the cost of the worker. Not to mention, in many cases, the employer is wrong, the pizza driver is an employee, not an independent contractor.

Thus, it is an issue for some workers – are they truly an independent contractor or is their employer abusing their rights to save money?

Are you an Employee?

The definition of an “employee” is contained in section 1 of the ESA. It states that an employee is:

Are you Truly an Independent Contractor?

As made by the courts under the “common law”, the definition of an Independent Contractor is now essentially: someone in business on their own account as opposed to someone in the business of their employer.

The courts have held that the followings factors are not very relevant in determining if someone is an independent contractor or an employee:

The Courts do not require that a worker meet each and every point above to be genuinely classified as an employee. All it takes to prove a worker is an employee, not an independent contractor is a review of all the factors combined to determine if it is reasonably true the worker is in business for his employer, not himself.

For example, In Warren v 2006515 Ontario Inc., 2005 CanLII 1757 (ON LRB), the OLRB looked at several factors in determining that a manager of a health food store was an employee and not an independent contractor. There were several facts that suggested the manager was an independent contractor: she invested in one product for sale to her own profit; for a period, she financed the balance of the inventory; she used the terms “Nutritional Services” and “Managerial Services” on documents to describe the work she did for the employer; and no statutory deductions were made from gross amounts owing to her for work performed. However, the OLRB found that there was substantial evidence to determine that the claimant was, in fact, an employee: the employer had control over her activities; the employer-provided the premises and the equipment used; the employer had ultimate control to determine what product would be stocked; and the claimant had essentially no opportunity for profit or risk of loss (See here).

If a court, the Ministry of Labour or OLRB finds a worker was wrongfully classified as an independent contractor, it may order the employer to pay the employee a lump sum amount of all the employment standards monies the employee ought to have earned while he worked at the employer.

If you believe you are being misclassified by your employer, contact us urgently. We at act for worker’s misclassified by their employees in all cases at the Ministry of Labour, the OLRB and the courts. Jeff Dutton is a former Ministry of Labour prosecutor and Monkhouse Law, to which Dutton Employment Law operates under, recently argued (on behalf of an intervener) a misclassification case at the Supreme Court of Canada in Uber Technologies Inc., et al. v. David Heller. We have experience in individual files and class actions on behalf of many workers at one employer, so don’t hesitate, call today for a free consultation. We will explain how we can quickly and economically get you your back pay.