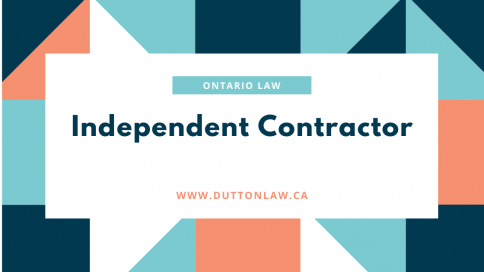 Someone who contracts to do a specific piece of work, and provides his or her equipment, and executes the work under his or her terms, without being subject to orders of work is generally an independent contractor, not an employee.

Why do some people want to be independent contractors?

In many cases, someone wants to be an independent contractor simply because they want to render services as a business for themselves like, for example, a computer repair person operating their own small company.

Other times, some people may be motivated to classify themselves as an independent contractor so they can claim deductions for expenses.

Why do some employers want to classify their employees as independent contractors?

In many cases, an employer will suggest or even order that, in an effort to save money, a person who would otherwise be an employee should be called an independent contractor.

In turn, in many cases, employers set up sham independent contract arrangements to shield themselves from these above-noted employment law protections.

Accordingly, with the rise of the gig economy, it has now become a crucial question of whether someone is an independent contractor or an employee.

Is someone an independent contractor or an employee?

Therefore, this article will use the example of tow truck drivers to determine who really is an independent contractor.

The law of independent contractors in Ontario

Section 1(1) of the Employment Standards Act defines an employee and employer as:

(a) a person, including an officer of a corporation, who performs work for an employer for wages,

(b) a person who supplies services to an employer for wages,

(d) a person who is a homeworker,

and includes a person who is an employee;

(a) an owner, proprietor, manager, superintendent, overseer, receiver or trustee of an activity, business, work, trade, occupation, profession, project or undertaking who has control or direction of, or is directly or indirectly responsible for, the employment of a person in it, and

(b) any persons treated as one employer under section 4, and includes a person who is an employer;

To that end, in 2006515 Ontario Inc. (c.o.b. Greco Health Shack), [2005] OESAD. No. 34 (January 12, 2005), the Ontario Labour Relations Board made the following observations concerning the ever-evolving common law definition of an independent contractor:

37. The test to be applied in determining whether an individual is an employee or an independent contractor at common law was recently reviewed by the Supreme Court of Canada in 671122 Ontario Ltd. v. Sagaz Industries Canada Inc. [2001] SCR 983. The Court reviewed the various tests which have been articulated at common law over time: the “control test”; the “fourfold test”; and the “organizational test” or “integration test”. The Court noted the difficulties which have emerged from the application of each of these tests. Of note, with respect to the “organization test”, the Court referred favourably to the following statement by MacGuigan J.A. in Wiebe Door Services Ltd. v. MNR, [1986] FC 553:

Of course, the organizational test of Lord Denning and others produces entirely acceptable results when properly applied, that is, when the question of organization or integration is approached from the persona of the “employee” and not from that of the “employer”, because it is always too easy from the superior perspective of the larger enterprise to assume that every contributing cause is so arranged purely for the convenience of the larger entity. We must bear in mind that it was with respect to the business of the employee that Lord Wright [in Montreal v. Montreal Locomotive Works Ltd. 1946 CanLII 353 (UK JCPC), [1947] 1 DLR 161] addressed the question “Whose business is it?” [Emphasis added [by the Supreme Court of Canada].]

38. The Court concluded (at paragraph 46) that: there is no conclusive test which can be universally applied to determine whether a person is an employee or an independent contractor”. The Court continued, however, as follows:

Para. 47 Although there is no universal test to determine whether a person is an employee or an independent contractor, I agree with MacGuigan J.A. that a persuasive approach to the issue is taken by Cooke J. in Market Investigations, supra [Market Investigations Ltd. v. Minister of Social Security [1968] 3 All. E.R.732]. The central question is whether the person who has been engaged to perform the services is performing them as a person in business on his own account. In making this determination, the level of control the employer has over the worker’s activities always will be a factor. However, other factors to consider include whether the worker provides his or her own equipment, whether the worker hires his or her own helpers, the degree of financial risk taken by the worker, the degree of responsibility for investment and management held by the worker, and the worker’s opportunity for profit in the performance of his or her tasks.

Para. 48 It bears repeating that the above factors constitute a non-exhaustive list, and there is not set formula as their application. The relative weight of each will depend on the particular facts and circumstances of the case.

39. Finally, it is important to note that whether or not an individual is an employee or independent contractor is a question of law to be determined after consideration of all the relevant factors. The intention of the parties is relevant only to the extent that it is reflected in the actual arrangements they have made with each other in structuring their relationship. Put another way, the parties cannot by their “agreement” render the relationship of an employee an independent contractor or vice versa: see for example Greypoint Properties Inc. [2000] OLRB. Rep. May/June 479 at paragraph 15.

Moreover, the Supreme Court of Canada in McCormick v. Fasken Martineau DuMoulin LLP, supra recently commented on the indicia of an employment relationship:

[23] Deciding who is in an employment relationship for the purposes of the Code means, in essence, examining how two synergetic aspects function in an employment relationship: control exercised by an employer over working conditions and remuneration, and corresponding dependence on the part of the worker. In other words, the test is who is responsible for determining working conditions and financial benefits and to what extent does a worker have an influential say in those determinations? The more the work life of individuals is controlled, the greater their dependency and, consequently, their economic, social and psychological vulnerability in the workplace: …[27] Control and dependency, in other words, are a function not only of whether the worker receives immediate direction from, or is affected by the decisions of others, but also whether he or she has the ability to influence decisions that critically affect his or her working life. The answers to these questions represent the compass for determining the true nature of the relationship.[28] While control and dependency define the essence of an employment relationship for purposes of human rights legislation, this does not mean that other indicia that courts and tribunals have developed, such as the Crane factors, are unhelpful in assessing the extent to which control and dependency are present. But such factors are unweighted taxonomies, a checklist that helps explore different aspects of the relationship. While helpful in framing the inquiry, they should not be applied formulaically. What is more defining than any particular facts or factors is the extent they illuminate the essential character of the relationship and the underlying control and dependency. Ultimately, the key is the degree of control, that is, the extent to which the worker is subject and subordinate to someone else’s decision-making over working conditions and remuneration:…

Finally, it is important to note that whether or not an individual is an employee or independent contractor is a question of law to be determined after consideration of all the relevant factors. The intention of the parties is relevant only to the extent that it is reflected in the actual arrangements they have made with each other in structuring their relationship. Put another way, the parties cannot by their “agreement” render the relationship of an employee an independent contractor or vice versa: see for example Greypoint Properties Inc. [2000] OLRB. Rep. May/June 479 at paragraph 15.

For further reading, see my article, independent contractor or employee? or watch this video by my colleague:

Application of the Law to an Example

Here is the background of my hypothetical tow truck business.

The issue to be determined is whether my drivers are an employee or an independent contractor.

This question is to be determined by examining the substance of the relationship.

The fact my drivers are obliged to work a minimum number of 12-hour shifts in one week, with the threat of penalties, is persuasive in finding an independent contractor relationship.

The fact I supply the equipment and am responsible for insurance and maintenance is also persuasive in finding an independent contractor relationship.

The fact my drivers are controlled by a rating system and had to follow my automobile associations’ rules is also persuasive in finding an independent contractor relationship.

My drivers did not in any real sense have a chance of profit or risk of loss, and they did not control the amount they would charge for their services.

Lastly, my drivers are economically dependent on me. Their schedule does not permit them any extra time to make additional income.

In these circumstances, a court or labour board would likely conclude that my drivers are employees and not independent contractors (indeed, I argued a very similar case with the same outcome).  I would, therefore, owe all unpaid wages that my drivers ought to have received.

If you believe you are being misclassified by your employer, contact us urgently. We at act for worker’s misclassified by their employees in all cases at the Ministry of Labour, the OLRB and the courts. Jeff Dutton is a former Ministry of Labour prosecutor and Monkhosue Law, to which Dutton Employment Law operates under, recently argued (on behalf of an intervener) a misclassification case at the Supreme Court of Canada in Uber Technologies Inc., et al. v. David Heller. We have experience in individual files and class actions on behalf of many workers at one employer, so don’t hesitate, call today for a free consultation. We will explain how we can quickly and economically get you your back pay.