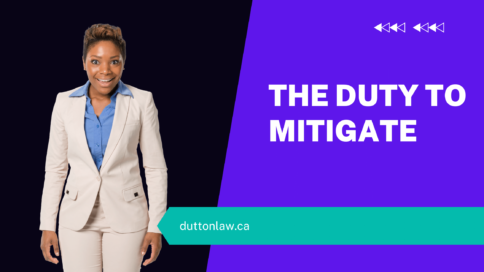 If an individual finds a new job during their notice period, income earned at the new job reduces the pay in lieu of notice/severance that the ex-employer will owe the individual. If, however, the individual turns down a new position or fails to make reasonable efforts to find a new one, then the amount the employee would have earned at a comparable position is similarly deducted from his or her award.

The rule that most individuals must mitigate comes from the age-old common law principle that a plaintiff cannot recover ‘damages’ that could have been reasonably avoided. Think of it this way: If you get in a car accident, and injure your hand, then you have to see a doctor, and you could be awarded less money from the insurance company if the doctor heals your hand fully. The same concept applies to employment law.

How Much Money Is Deducted From The Duty To Mitigate?

For example, if someone earned $100,000 per year at the job they were terminated from, and they ought to receive a twelve-month notice period (i.e., $100,000 in severance), and they work 4 months of the year the next year making $40,000, then $40,000 would be deducted from the amount of pay in lieu of notice the ex-employer would owe them.

Is All Income Deducted From The Duty To Mitigate?

Lastly, there is conflicting case law that holds that some income from non-comparable, low-income work is not income that should be deducted under the duty to mitigate rule. The Ontario Court of Appeal’s recent decision in Brake v. PJ-M2R Restaurant Inc., 2017 ONCA 402 stands for this proposition. The court stated in paragraph 159:

What Happens If Someone Fails The Duty To Mitigate?

As discussed above, the duty to mitigate is a two-part rule. First, generally, most individuals must try to find new work to minimize their damages. Second, generally, any income earned if someone finds new work is deducted from their damages.

To that end, what if an individual fails in their duty to try and find new work? What if someone just refuses to look for or apply for new jobs?

As per the duty to mitigate, all individuals must act reasonably to find a new job. Individuals must be realistic; they cannot only pursue high-risk job search efforts.

If an employee fails to find a new job because they acted unreasonably, for example failing to apply to any jobs or only applying to unlikely jobs, then a judge should cut several months off their notice period. The judge should consider at what point the individual should have found comparable work by and end the notice period on that date.

The “duty to mitigate” in Ontario/Canada can be summarized as follows: