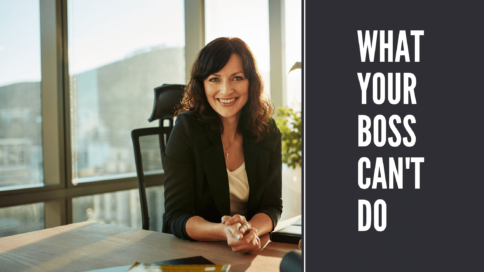 What legally prevents a bad boss or employer? The common law of employment in Canada, provincial statutory employment standards, provincial human rights laws and the Canadian law of contracts prevent your boss from doing many different bad things to you at work.

A boss is a representative of the employer, and therefore an employer is liable for its bosses’ actions. So, if a boss does something they aren’t supposed to you, your employer could be on the hook. When a boss does something they are not supposed to, the employer may have constructively dismissed the employee. When someone is constructively dismissed, they are entitled to quit work and obtain a severance as if they were let go.

To that end, in no particular order, here are ten non-exhaustive things your boss cannot legally do to you in Canada:

Your boss can’t create or allow a toxic workplace. An implied term of any employment relationship is that the employer will keep a toxic-free workplace. If that standard is breached, the employee can claim that he or she has been constructively dismissed.

For a toxic work environment to constitute a constructive dismissal, it must be such as to render continued employment beyond what a reasonable employee may reasonably be expected to bear impossible.

What is constructive dismissal? I will discuss that in the next section.

Force you to quit your job

Your boss can’t do something that gives you no choice but to quit your job. For example, your boss can’t give you no work, or overwork you or mistreat you so badly that the only thing a reasonable person in your shoes would do is leave. Moreover, your boss can’t tell you to quit or else be fired.

If you are “forced” to quit, it is usually a constructive dismissal.

This does not mean that just about anything that causes you to ponder quitting causes a constructive dismissal.

Thus, the question to be answered in terms of whether someone is forced to quit, which equates to a constructive dismissal, is whether that person’s employer’s actions demonstrate its intention to no longer be bound by its employment contract.

For example, it is well established that quitting because of a reduction of your responsibilities can constitute constructive dismissal. The seminal text, Quitting for Good Reason, The Law of Constructive Dismissal In Canada states at pages 246-247:

It is against the Employment Standards Act, Ontario Human Rights Code and Occupational Health Safety Act to reprise against an employee for exercising their rights under all three of these statutes.

As my colleague Andrew Monkhouse explained in a blog post:

[A reprisal is when], [t]typically, the employer will implement measures to affect the employee’s income negatively, or, more commonly, threaten to terminate the employee under false allegations of cause. The employer may also suspend, penalize or even intimidate and coerce the employee as retaliation for asserting their rights.

It is important to note that acts of reprisal can also occur in a very subtle and discrete manner such as a negative performance review, or a hostile attitude or work environment.

Your employer cannot lower your rank, position or duties.

A demotion, which generally means discipline or cost-cutting moves amounting to less prestige and status, is a substantial change to an employment contract’s essential terms that warrants a finding that the employee has been constructively dismissed.

To put it another way, changes of a fundamental nature to employment made unilaterally by an employer without the agreement of or acceptance by the employee constitute a rejection by the employer of the employment contract and constitute a constructive dismissal even though the unilateral decision may have been made for discipline or corporate or financial reasons of importance to the defendant and without any intention to harm the employee.

It is always more likely a constructive dismissal if the employee is demoted in rank and in pay.

Employees in Ontario have the right to a discrimination-free workplace. This includes all areas of active employment (and the hiring and termination of employment), including wages, hours, job descriptions, the assigning of work, evaluations, discipline, promotion and everything else under the employer’s control.

Discrimination can lead to not only a constructive dismissal but also damages for injury to dignity and self-worth.

Take money from your paycheque

An employer must not withhold wages payable to an employee, make a deduction from an employee’s wages or ask the employee to return his or her wages for any reason. For instance, your employer cannot ask you to pay back money that is lost or to pay to repair broken equipment.

The only exception to the general prohibition against deductions from paycheques is when a court order orders it or the employee authorizes the deduction. In addition, the Ontario Labour Relations Board has held that the employer may deduct wages paid in error from an employee’s paycheque. As the adjudicator pointed out in All-Way Transportation Services Ltd v Fountain (June 6, 1979), ESC 627 (Brent), when an employee is overpaid, they were never entitled to the amount that the employer seeks to deduct, so it cannot be regarded as wages payable in the first place.

Your boss cannot lower your compensation. A reduction in your compensation will in most cases constitute a constructive dismissal. It does not matter if your employer is experiencing financial hardship or if it is some kind of discipline.

However, concerning discretionary or incentive-based bonuses, the court in BMO Nesbitt Burns Inc. v. Bond, 2002 CanLII 3184, stated, “[w]here terms of employment do not entitle an employee to a particular income or commission level, and an employee knows that an adjustment could be made at any point during employment, a change in remuneration does not constitute constructive dismissal”.

Fail to pay you

However, the catch is that even if you are successful in claiming constructive dismissal from your employer for failure to pay you, you may not be paid your court-ordered award. You cannot milk a dry cow. If your employer has no money to pay your wages, it very likely has no money to pay after you successfully sue it. Thus, there may be no sense in going to the expense of suing. Your best recourse, then, perhaps is to sue the directors of the employer corporation. The Employment Standards Act and the Ontario Business Corporations Act provide for the personal liability of a corporation’s directors for employees’ wages.

One final issue to consider is that when an employer or a director goes bankrupt, an employee’s claim for missing wages goes to the bottom of the list as an “unsecured creditor”, making it less likely you will ever get paid your missing pay.

Take the hint: if your employer stops paying you, run! Cut your losses. Don’t wait it out with false hope.

Your boss cannot harass you. What kind of behaviour is harassment? Harassment includes:

Thus, where there is workplace harassment amounting to a breach of the contract, it could be a constructive dismissal.

Not pay you severance if you are terminated

Last but not least, your boss/employer cannot refuse to pay you severance if you are terminated without cause.

Almost everyone is entitled to severance unless they were terminated for just cause.

Your boss cannot rely on bogus allegations of just cause to refuse to pay you severance.

Furthermore, your employer cannot contract out of severance pay either. Yes, your contract can limit your severance pay, but at minimum, you must be paid one week of severance for every year of service up to a certain maximum. Keep in mind; however, most people are entitled to common law severance pay, which is worth far more than minimum severance pay.

Lastly, your employer cannot also pay you insufficient severance. If you were offered some severance, but it is not adequate, it is a “wrongful dismissal”.

Dutton Employment Law represents employees in Ontario in legal issues with their employer. Call us for a free consultation to discuss how we can help you.